The Review Page calls Downtown Express, “More New York than Spike Lee and Woody Allen.”   So, for all you Montclairians who want to be swept away in music and romance with a backdrop of New York City, we know you are out there; Downtown Express is your  must-see film. 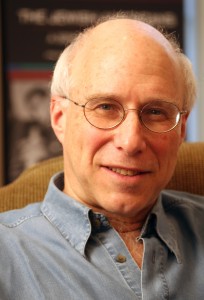 Grammy nominee, Philippe Quint, is Sasha,  a virtuoso violinist who plays in the Subways of New York for money.  He plays at Juilliard for his father, but, when he meets Ramona, portrayed by acclaimed recording artist Nellie McKay, he starts to play for himself.  He joins her band, falls in love and begins to lead a double life conflicted between his father’s aspirations and forging his own destiny.

David Grubin, director writer, producer, cinematographer and former resident of New Jersey has produced over 100 films ranging from history to art, poetry to science winning every award in the field of documentary television.   There’s more, David’s other achievements include, but, not limited to; George Foster Peabody prizes, 5 Writer’s Guild prizes and 10 Emmys.

The Montclair Film Festival committee had a chance to catch up with David to learn more about his inspiration for Downtown Express, the challenges of his latest undertaking and his connection to New Jersey.

What was it about this topic that inspired you to make this film?
I wanted to tell a story where music played a central role in driving the narrative, and music would express the film’s central conflicts and passions.  I didn’t want a traditional score. Instead the performances, rehearsals, and kinds of musical doodlings that are part of the daily life of a musician would give the soundtrack an authentic, lavish musical character.

What was your single biggest challenge in getting this film made?
I’ve made documentary films for more than 40 years.  This was my first narrative fiction. The challenge for me was to bring my experience as a documentary filmmaker – where credibility is a given – to fiction film making, where an entire world has to be created and made to feel authentic.

What’s your New Jersey connection?
I spent most of my childhood and all my school years in New Jersey, first in Irvington, then Hillside, and finally Short Hills. My Mom still lives in New Jersey – in Maplewood.

Go to  http://downtownexpressfilm.com, watch the trailer and listen to music by Michael Bacon,  ( yes, the brother of Kevin Bacon) and Nellie McKay.