The Resurgence of Cuba’s Architectural and Artistic Gem

The documentary film, Unfinished Spaces, traces the path of Cuba’s Revolution by delving into the unfortunate story of the Cuban National Art Schools and the experiences of the three innovative architects commissioned to design the Schools’ buildings. Their work was halted when Cuba’s political climate turned against them. Now, after forty-five years, they have a chance to complete that work.

“Unfinished Spaces features intimate footage of Fidel Castro, showing his devotion to creating a worldwide showcase for art, and it also documents the struggles and passions of three revolutionary artists. It is as much about nature and human nature as it is about architecture,” said co-director/producer Alysa Nahmias. 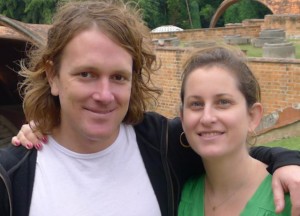 In the spring of 2001, Nahmias and her co-director/producer, Benjamin Murray, visited the National Arts Schools in Havana. The modern, brick buildings were in ruins but still were home to the most talented art students in Cuba. The filmmakers met one of the school’s original architects, Roberto Gottardi, after touring the campus. He shared photographs, old documents and press clippings chronicling the grand project. “The architect and his buildings paralleled the Cuban Revolution itself, from utopian vision to tragic ruin, and ultimately to an uncertain future,” said Nahmias.

Nahmias and Murray had a stroke of luck one afternoon at an artist’s cocktail party in Havana at their project’s initial stage. They were introduced to Roberto Chile, a Cuban filmmaker who was Fidel Castro’s personal documentarian. The rapport that developed between the three of them led Nahmias and Murray to a treasure trove of never before seen footage of Castro discussing plans for the schools. Without Chile’s help, they wouldn’t have been able to reveal Castro’s complex character as they did in Unfinished Spaces.

It took ten years to make the film. Nahmias and Murray are pleased with the results of their journey: “We find it most remarkable how our initial creative spark remained bright enough to guide us through so many twists and turns. We set out to make a film that portrayed three artist-architects who are extraordinary human beings with complex emotions, and that we would offer a fresh perspective on Cuba and on the ways architecture can engage with society. We think that’s the film we’ve made, and it’s been worth the wait.”

Alysa Nahmias is founder and executive producer of Ajna Films. She holds a Master’s degree in architecture from Princeton University.

Benjamin Murray started his post production company, The Room, in 2010. He currently partners with Technicolor through two Flame Premium Suites. Two of his recent projects are No Direction Home, directed by Martin Scorcese and Capitalism, A Love Story, directed by Michael Moore.