What could be more “Jersey” than spending many summers of my happily misspent youth at such places as Long Branch, Asbury Park, Seaside Heights and Belmar? 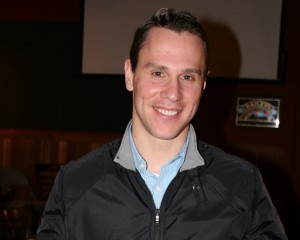 Nothing, apparently, according to New Jersey native Thomas Bentey, who wrote, directs and stars in his new film, At the Jersey Shore.

As an avid lover of going “down the shore”, I jumped at the chance to interview Thomas about the pop culture spotlight that has focused on New Jersey in recent years and what he hopes to convey about the Garden State that he calls home.

MFF:  What was it about this topic that inspired you to make this film?

TB:  Spending my summers at the Jersey Shore since birth, I always knew that it would be the perfect backdrop to some sort of coming of age story. I felt that the most beautiful beach days, followed by chaotic nights, said a lot about the duality of people. And coming to terms with all that the area had to offer, would make any character stronger.

Joe, (the protagonist in the film) influenced partly by negative representations in the media;
arrives at the Shore bitter, angry, and even though he is not yet the suave reporter he aspires to be, Joe (as many others do) feels that he is “too good” for the place. His initial opinion proves itself true: the clubs are seedy, the people down there are shady. But he comes to realize (as I hope the audience does as well) that there’s a lot more to the Jersey Shore than just sex, drugs and reality TV clichés.

TB:  I worked so hard and long on writing the script, I thought that once that was done, everything else would fall into place. I now realize that having a solid script is only the foundation. The film changes from page, to production, to editing room. Holding onto your initial vision, yet being open to variations is crucial to making a worth-while final product. The script is not written in stone– as I found out– but a living, breathing, artistic endeavor, meant to be altered. The characters in the screenplay were written very specifically, and at first I wanted the actors to follow the script verbatim. I had the insight to quickly realize that the talented actors I cast, could bring so much more to their characters and ultimately to the final product, if I let them work their magic. They did just that, and I am forever grateful.

TB:  I read from time to time that New Jersey is the most made-fun-of State in the Union. Does the rest of the country really think we are a state filled with yahoos? Are they really that misinformed? Born and raised in the Garden State, I am a proud to be a New Jerseyean. I love being so close to major cities, yet a world away at the same time. And despite what my New York City friends say, I know that there are good restaurants, theaters, shows, and cultural events right here in the Suburbs.

I wonder if other states have the diversity of New Jersey. Each region is very unique
and has its own defining characteristics. And I love it all; from the forest at High Point
State Park to the Victorian Homes in Cape May, from the Yankee fans on the George
Washington Bridge to the Philly Fans on the Ben Franklin Bridge, and from fist pumpers
at KARMA to the farmers in Hunterdon County, I am proud to call New Jersey my
home. And if you still don’t think Jersey is a great place to live, I have one word for
you…..BRRRRRRRRUUUUUUUUUCCCCCCCCEEEEEEEEEEEE!!!!!!!!!!!!!!