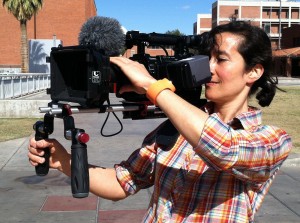 Being part of a “military family” was nothing I ever thought about until my son joined the US Air Force Academy as a cadet in 2010.  Even though he’s still a student and won’t have to begin his Air Force career until he graduates in 2014, paying back his education with a 5-year commitment, the new film Flat Daddy was obviously one that was close to my own heart.  As the father of an Air Force cadet, every soldier I now see in a magazine, newspaper, on TV, in public or the movies, is my own son.

Having a close family member in the military has given me a new-found awareness and an appreciation of the issues surrounding the families of all active duty military personnel throughout all branches of the Armed services. 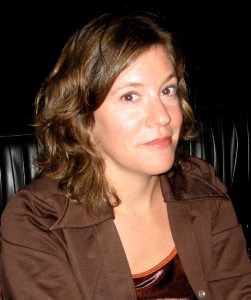 Flat Daddy is the poignant and sometimes heart-wrenching story of several military families and how they deal with the long term separation from loved ones who are often deployed to far-off and dangerous places for a year or more.

I caught up with co-directors Nara Garber and Betsy Nagler for this recent interview:

MFF:  What was it about this topic that inspired you to make this film?

FD:  As civilians living in New York City who didn’t know anyone serving in Iraq or Afghanistan, we were initially intrigued by the flat daddies themselves and the powerful visual statement they made about loss and absence during wartime.  We had a lot of the same questions that most people ask when they hear about the flat daddy phenomenon: who are these families who have chosen to make cardboard cutouts an integral part of their lives?  How does a family adapt to the daily absence of a mother, father, husband, wife, son or daughter, while simultaneous trying to keep that person present for the 12 months or more that they are deployed?  And what happens when that person returns home… or doesn’t?  Once we started meeting actual families and becoming more involved in their daily lives, we realized that these questions only scratched the surface.  The war was having a profound and enduring effect on a very small portion of the American population that had been asked to shoulder an enormous burden, and this would have ramifications for the future of the American military and our society as a whole.  That realization inspired the film that Flat Daddy ultimately became.

MFF:  What, if any, were some of the surprises you encountered making this film?

FD:  We were surprised at how willing people were to open up to two filmmakers from Brooklyn.  As civilians from a blue state, we didn’t really know what we kind of reception we’d receive from military families living in communities very different from our own.  We soon realized, however, that this wasn’t an issue.  Once the families in our film understood that we were genuinely interested and believed their stories were important, they quickly began to talk.  It was a nice surprise to find that, even at time when the country is divided along a number of ideological fault lines, it’s easy to bridge those divisions if the effort is made.

MFF:  What do you hope audiences will take away after seeing your film?

FD:  Only 1% of Americans serve in our all-volunteer Armed Forces, while 70% of military families live off base, within civilian communities.  We hope that our intimate and non-partisan approach will make the experiences of these families accessible to civilian audiences and encourage them to support the military families in their communities, either directly or through existing organizations.  For veterans and their families, we hope that the film will do justice to the unique sacrifices they have made.  We also hope that watching Flat Daddy will make it easier for military families to discuss their own experiences both with civilians, who will be better able to understand the military lifestyle after seeing the film, and with each other.  It’s often hard for spouses to reconnect after a deployment because the demands placed on each are so extreme and so different.  We’ve had several veterans mention to us that the film made them much more aware of what their families had gone through during their absence, and we hope Flat Daddy can facilitate this sort of discussion among couples at time when the divorce rate in the military is steadily rising.

MFF:  What was your single biggest challenge in getting this film made?

Financing it!  We got a grant from the New York State Council on the Arts that we assumed would be the first of many just before the market collapsed in 2008, and from that point on it was an uphill battle.  But it wasn’t just the economy; the public’s waning interest in the war itself made the subject matter a liability.  We had potential funders advise us to make a film just about the flat daddy phenomenon or hint obliquely that the film should be overtly political.  We were committed, however, to telling the stories of these families with as little editorializing as possible, and we ultimately completed Flat Daddy with the support of individuals who believed this film needed to be made.  We raised our finishing funds through Kickstarter, and our end credits are probably 10% people who appear in or worked on the film and 90% people who helped make it possible through donations, large and small.  One military spouse made a donation after sitting down with her two kids to discuss what they’d have to go without that month to balance out the expense.  We feel a very personal responsibility to our funders, and are pleased that they’ve liked the film so far!

FD:  We first hit the road thinking that we were going to make a film about flat daddies in all their poignant, surreal, eerily symbolic glory.  We realized very early on in that first trip, though, that the cutouts were only a point of entry, and that the real story lay elsewhere.  Once we made that mental shift, our goals have remained pretty consistent: we wanted to provide a window into the lives of these families who make sacrifices every day while the rest of us enjoy life pretty much as usual.  Making the film and meeting these families was an incredible education for us.  If Flat Daddy can provide viewers with a condensed version of our own experience, we will feel we have succeeded.

FD:  Co-Director and Editor, Betsy Nagler grew up in New Jersey, residing in Newark until the age of seven, and then in South Orange, where she attended Montrose School, SOJH, and Columbia High School.  She’s excited that Flat Daddy will be showing at the Clairidge Cinema, where she saw a number of films during her formative years — including ET, which helped inspire her to become a filmmaker.  (Any similarities between ET and Flat Daddy, however, are purely coincidental).