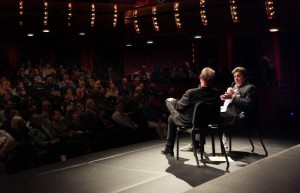 The sold out crowd was there to see The Oranges, a comedy-drama set in Essex County, New Jersey.

At the end of the movie, the audience was treated to an interview with the actor Oliver Platt who played Terry in the movie.  Platt was interviewed by Montclair resident David Carr, a columnist for the New York Times.

Platt’s character plays the best friend of his not-so-happily married neighbor who is now having an affair with his character’s daughter.  He explained that the universal theme of the movie was “..the elusive nature of fulfillment.”

When asked how he sustains his own nearly 20-year marriage, Platt replied, “By paying attention and tending it.  (Doing the little things like) notice the new haircut.”  At which point Carr added, “And total capitulation.  But don’t hit — stay away from that,” which drew a hearty laugh from the crowd.

Platt went on to say that what he loves about being an actor most,“ is being able to make a living pretending I’m someone else.”