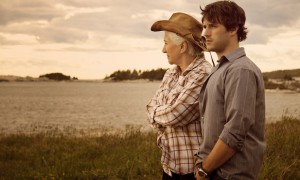 To describe Cloudburst in brief, it is something like, “Thelma and Louise for the assisted living set.” So joked Mary Alice Williams, as she began the question and answer session with Olympia Dukakis following the screening of her latest film.

In actuality the movie is an uproarious telling of an elderly lesbian couple (Dukakis and Brenda Fricker) who escape from an old age home in order get married in Canada. Running from the police and picking up a hitchhiker, the two endure many adventures along the way, and the viewers at Bellevue Cinema were moved to both laughter and tears by the story.

Dukakis noted that it was the first time she was seeing the film with an audience. Sold out not long after the tickets were posted, the event was particularly meaningful for Montclair residents, some of whom remember Dukakis as a neighbor in the thirty years that the city had been her home.

During the Q&A session, those very years were the focus of several questions from audience members. They asked about her experiences with the Whole Theater Company, which she co-founded in 1971 in Montclair with her husband, Louis Zorich. Due to a faltering budget, the company closed its doors in 1992.

At the time, coincidentally, the company was putting on a play about a lesbian couple trying to have a child and create a family. The play received widespread attention but not all of it positive – Dukakis thought the controversy it generated may have contributed to the demise of public support for the company.

Similar problems seem to be plaguing Cloudburst, which is having a difficult time finding distribution in the United States because of its subject matter. Dukakis noted that it is a testament to both Montclair and New Jersey about its commitment to the arts that such a film was screened here, and such a festival could have been created.

A veteran theater and film actress, Montclair was extremely fortunate to have been home to Dukakis’ artistic ventures then and now. Explaining her idea of what art brings to a community, Dukakis quoted Frederico Garcia Lorca, “The poem, the song, the picture is only water drawn from the well of the people, and it should be given back to them in a cup of beauty so that they may drink – and in drinking, understand themselves.”