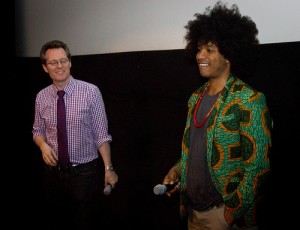 Cartoon characters bloom on the screen, stop-motion wooden figures make calculated steps towards each other, suddenly we return to the photographic depiction of a couple, alternate between films as a narrator pauses to inform us of the change – Terence Nance’s debut film “An Oversimplification of Her Beauty” is nothing if not complex. But that complexity is one that rewards its audience with a realistic and artfully made film about the nature of relationships and our memories of them.

The film follows the story of a couple in 2006 played by Nance and Namik Minter, at once a true depiction of their relationship and yet a retelling of it. “It all really happened,” Nance told the audience in a question and answer session conducted with festival director Thom Powers. He was quick to add, however, that the film was not a documentary. He humorously noted it was more like “one-sided nonfiction.”

The audience gathered at the Clairidge Cinema on the evening of May 4 was treated to an extended festival cut. Apart from festivalgoers, no one else will be able to see the film in this lengthier form. Fresh from its enthusiastic Sundance reception, the film has also gained much attention at international film festivals.

Coming from an artistic family – Nance’s mother was an actress and father a photographer – the tools of filmmaking have always surrounded him. In addition to film, Nance pursues his other artistic passions, including: music, writing, performing, and visual arts.

Visual and narrative themes recur in the film, which led one audience member to ask about the nature of this repetitiveness. Nance remarked that this effect was intentional and meant to convey the repetitive style of the blues.

This kind of depiction of a black relationship is certainly not a feat that is either repeated or duplicated in mainstream cinema. The trials of young love are a universal experience, and as the Montclair Film Festival audience discovered, is one that can be depicted with  a black couple with as much universality as a white one.