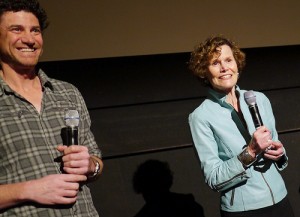 Judy Blume has sold over 75 million copies of her well known and affecting books. Her work has been translated into more than twenty languages, yet she has never made it to the big screen.

That is until now.

Tiger Eyes is about a young girl named Davey who is transplanted from New Jersey to New Mexico after the death of her father and goes on a journey “La vida es una Aventura” (life is an adventure). Judy’s son, Lawrence Blume, directed produced and co-wrote the screenplay with his mother and it is particularly meaningful because Blume was born and raised in New Jersey.

When asked why her novels have not made it to the big screen before she says it’s primarily the lack of passion on the part of other filmmakers who might not see her stories as mainstream moneymakers.

During the Q &A Lawrence talked about finding a lead actress to play Davey. They chose to go to the casting directors who worked on Winter’s Bone to find the perfect teenager to play the part. That’s when they found Willa Holland who Lawrence said really understood who the character was and that’s why they hired her.

When asked about future plans for the movie, Lawrence said that the movie will be shown at a few more festivals before seeking distribution on a larger scale.

More images from the screening & Q & A HERE.