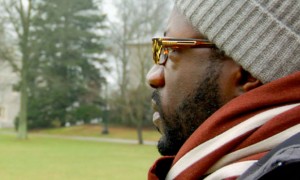 Audiences lined up outside Claridge Cinemas in Montclair Saturday afternoon to see the sold out world premiere of The Prep School Negro, a documentary about the culture clashes and social alienation of black students from inner city neighborhoods in Philadelphia getting scholorships to all-white prep schools. Attending the screening was the film producer Barb Lee and director André Robert Lee who provided a quick Q&A.

Lee addressed the audience before the film began, asking them to go into the feature “thinking about where the heart and mind meet”. Lee, who also starred in the movie, asked the audience to put themselves in his shoes while trying to understand the conflict of separating his family and neighborhood values from the alien world of an all-white prep school.  He described the separation as being a “psychological homelessness.”

The world premiere of the film was received with emotional applause from the audience. When questions were opened up to the audience, many expressed a strong emotional connection to the story of Lee. When asked about the issue of race at Germantown Friends School, Lee spoke of Supreme Court Justice Clarence Thomas and his ideas on Affirmative Action as being a type of social experiment. He also talked about President Obama growing up in the same type of situation and a few audience members also shared their stories.

The Prep School Negro began as a short that was taken to 176 schools across the country to spread awareness. Lee made The Prep School Negro (feature length) in order to become closer to his family while trying to understand the conflicts he came across while attending GFS. Lee mentioned that he was urged to make the short longer after conversations with The Academy of Motion Pictures. Lee says “I thought I was expanding my film but I made an entirely new film”.

More information on The Prep School Negro can be found at theprepschoolnegro.org