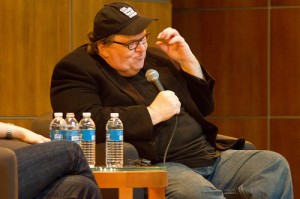 Festival-goers began lining up well beforehand to see director and documentarian Michael Moore at the Montclair Art Museum on Sunday.

Moore, famous for documentaries such as “Bowling for Columbine” and “Fahrenheit 9/11,” entered to a standing ovation from a sold-out audience in Leir Hall. Over the course of the 75-minute conversation, hosted and moderated by festival director Thom Powers, Moore talked community, filmmaking, politics, and even offered some advice for the future of the Montclair Film Festival.

Powers opened the discussion by asking Moore what drove him to start the Traverse City Film Festival in his home state of Michigan. Moore explained that he wanted to bring films together that wouldn’t normally be shown at the larger festivals, and also wanted to know what a festival would look like “if a filmmaker put it together.” On the value of showing films in communities, Moore mentioned that universities tend to bring more cultural exposure to small towns with their speakers and films (considering the involvement of Montclair State University in this festival, he certainly has a point).

Moore then shifted to politics. Regarding the politically-charged tones of his films, Moore said that “the politics has to come second to the art,” believing that people should be entertained first. He tries to use humor as much as possible given the sobering topics of his films, such as “Capitalism: A Love Story,” which deals with corporate corruption. Moore is a fervent liberal, but he still took time to decry both ends of the political spectrum for the current state of the country. Ultimately, though, he said, “We’re all Americans, we’re all in the same boat, and we will sink or swim together.”

The conversation briefly turned towards environmentalist issues, with Moore saying how he hates recycling because “it makes us all feel like we’re doing something to save the planet,” and the floor then opened for questions. Moore was asked to comment on the auto industry bailout, the Affordable Care Act, and the ethics of documenting an Occupy Boston police beating versus helping the victim.

Finally, Moore encouraged the Montclair Film Festival to do more next year, saying, “I think we should show films in places like Montclair that make us, liberals, uncomfortable.” Moore was particularly insistent throughout the conversation that young people be involved in the art of filmmaking, remarking at one point, “I think we’ve raised a really good generation of kids.” However, that didn’t stop Moore from fitting in a light-hearted jab that New Jersey is “just ripe for satire.” (He quickly added, “The good kind!”)

Moore’s dry, poignant humor kept the audience on their toes for a thoroughly entertaining and insightful event, to the point where people were still buzzing with questions as they filed out of the hall. Michael Moore may prove to be a hard act to follow for next year’s festival.