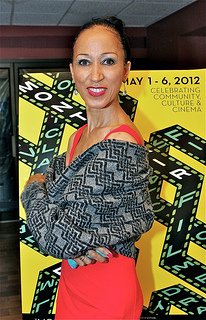 As the Montclair Film Festival wrapped up Sunday afternoon, the screening of About Face a documentary focusing on beauty and hardships in the modeling business, director Timothy Greenfield-Sanders, producer Chad Thompson and one of the model interviewees, Pat Cleveland, came to discuss the documentary .

Timothy Greenfield-Sanders opened up the discussion with his reasoning behind making the film, explaining that he “wanted to get past the cliché that models are beautiful but not interesting”. Sanders went on to say  that these models “couldn’t survive without being exceptional”. When Pat Cleveland was asked what it felt like being a “racially ambiguous model”, she joked, “It feels like being a cocktail.”

Sanders went on to describe the excitement of his new film as well as having made The Black List (2008) and Latino List (2011) after which he turned his interest into the “theme of confidence in the modeling world”. After two years of production capturing models of the 1970s and 80s, HBO bought the rights to the film About Face. The film went on to be a hit at the 2012 Sundance Film Festival and opened to more screens in January.