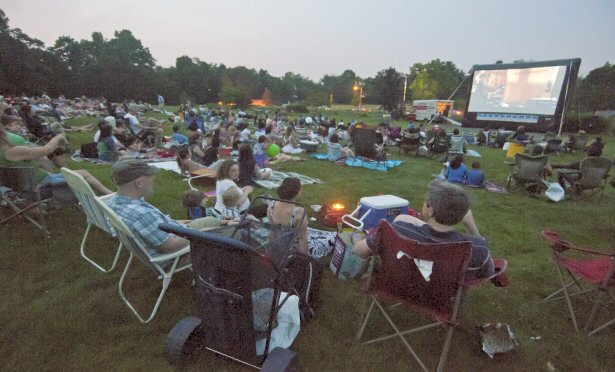 Cars lined Upper Mountain Avenue, Highland Avenue, and a few other nearby side streets and despite the humidity and a considerable number of insects, the field just beyond the Gardens was filled with hundreds of patrons toting lawn chairs, picnic blankets, and snacks for the movie. Free bags of popcorn were also provided by festival volunteers in “Pink Ladies” jackets.

The event was advertised as a sing-along, and although some preferred to simply watch, others chose to join in with the actors on screen. An impromptu chorus could be heard over the film’s iconic soundtrack, with many songs ending in applause. Some of the braver souls danced, clapping their hands to “Born to Hand Jive” and raising their fists with Danny Zuko while “Greased Lightning” played on the giant inflatable screen. A few people were still dancing even after the movie was over.

Cinema Montclairismo continues throughout the summer, with screenings of Raiders of the Lost Ark (July 13th), Big (August 10th), and The Breakfast Club (September 6th).