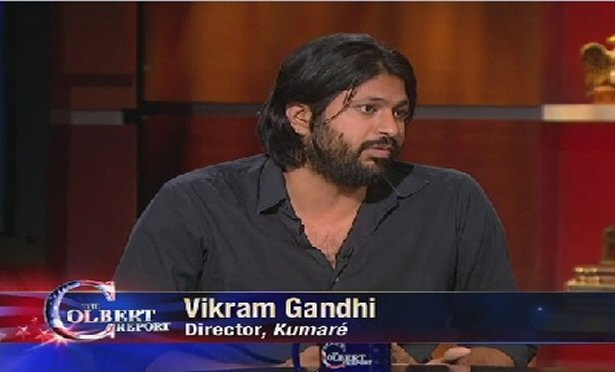 Late last month, Vikram Gandhi went on The Colbert Report to talk about his film Kumaré, which was shown during the Montclair Film Festival to a sold-out audience.

Gandhi directed and starred in the film, a documentary that follows a fake guru’s visit to Arizona and the impact on his newly-made followers. He talked with Colbert about pulling off the character and the role of spirituality in the film’s message. (There’s a great moment about a minute in: Gandhi mentions seeing true things through the eyes of a fictional character, and Colbert quips, “You’ve lost me.”)

Stephen Colbert and his family are visible supporters of the Montclair Film Festival. He is a member of the advisory board, and his wife, Evelyn, is on the board of directors.

Gandhi was also kind enough to share a few extra bits of information for this site.

Montclair Film Festival: What influenced you to make this movie?

Vikram Gandhi: I was inspired by the burgeoning yoga industry in the USA, orientalism in general, and humanity’s on-going belief that certain people have more spiritual answers than others. I basically had a perspective that people around me weren’t expressing, and I wanted to say something personal about it.

MFF: How much of your portrayal was played by ear (without research)?

VG: Kumaré is a character that lived inside me — I grew up meeting a lot of “holy men.” As for academic and practical research, this had already happened organically during much of my life. Other than that, I was making things up as I went along.

MFF: Was the name Kumaré meant to sound like a mantra?

VG: Kumaré is my middle name, Kumar, meaning “son of” or “prince” with an “é” sound at the end. It was meant to sound strangely foreign, like Italian being pronounced in an Indian accent — something “moderately ethnic.” It was supposed to be just a sound. I used the vowels in Kumaré — UAÉ — to represent a mantra, like AUM [a sacred sound used in meditation]. I called UAÉ “the new AUM.” AUM 2.0.

MFF: Would you follow your own Mirror philosophy [the idea that people project themselves onto their religious leaders]?

VG: For sure. It’s so simple and obvious, and is definitely effective. Sticking with it takes a lot of work.

Please click the link below  to view The Colbert Report interview with Vikram Gandhi.