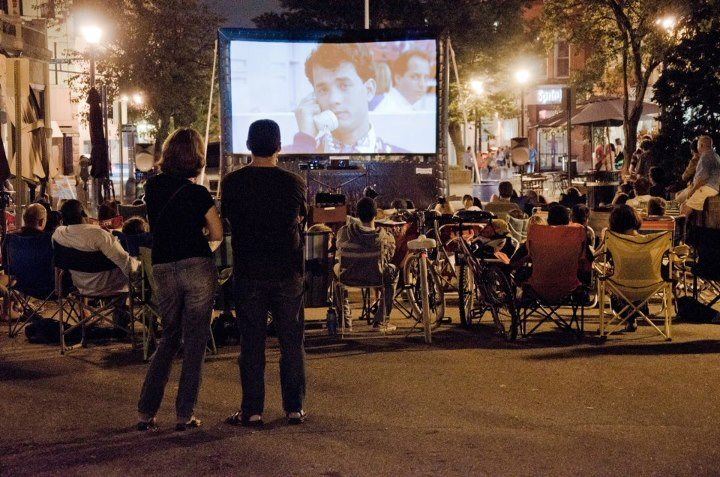 The “big” night was finally upon us when the Montclair Film Festival took over Church Street in Montclair for a showing of the 1988 film classic, Big. Much the way they set up at the Van Vleck Gardens last month for the showing of Raiders of The Lost Ark, a large projection screen was erected, along with accompanying sound system. 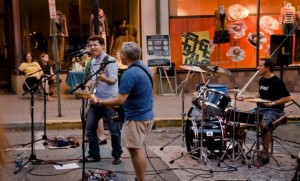 The Sockmonsters provided the expected great pre-film musical entertainment, and created a festive atmosphere for the small crowd that gathered beforehand, many of them discussing the film to come (those who had seen the film, telling those who hadn’t just enough to pique their interest). Big has become a must see film due to its fun, unabashed approach toward childhood and the world of adults. Some of comedies’ most memorable scenes have come from this film (the floor piano, the trampoline…).

Besides being closed to vehicular traffic, it was a typical, bustling Friday night on Church Street–businesses were open as expected providing their usual fare and Red Mango’s twisty frozen yogurt appeared to be the most popular treat enjoyed by the gathering film crowd. Various passers-by showed genuine interest and the crowd would later grow by a couple dozen people.

Although there have been a number of age-altering films made over the past years (Like Father, Like Son, 18 Again! Vice Versa…), Penny Marshall’s Big holds a special place among these films, mainly because of the casting of the lead character. Tom Hanks does a brilliant job of making you believe that he actually is a 13 year old boy named Josh Baskin, trapped in a man’s body, and the crowd thoroughly enjoyed it!

I am looking forward to the next screening in this series of summer movies, The Breakfast Club, coming on September 7th to the Montclair State University Amphitheater.