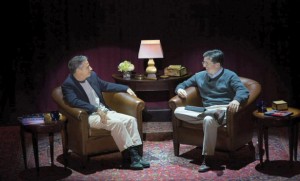 If there was one event to attend where two late-night comedians shared advice, insight, and absurd stories surrounding their wildly-popular satirical shows …  this was it.

The duo wasted no time as they launched into the story of their first meeting at the press conference announcing Stewart as the new host of The Daily Show. Colbert attended as a correspondent, bluntly asking if Stewart’s appointment would hurt his chances of becoming host. (Stewart leaned over to the president of Comedy Central and muttered, “I thought you said he wasn’t funny.”) From there, an intellectual partnership was formed, though Stewart said he faced a great deal of creative resistance to his vision of the show, citing a desire to write jokes about things he cared about. In fact, he revealed that his agent had to talk him off “a moderately-high cliff” to keep him involved.

Within two-and-a-half years, Stewart finally felt he had a staff that would back his decisions—and of course, The Daily Show’s shift in focus helped it evolve into the biting analysis of current events that viewers know today. “Our show is about deconstructing an idea,” he explained, before he and Colbert discussed the challenges The Colbert Report faces in both deconstructing an idea and then reconstructing it through the eyes of “Stephen Colbert,” the brazen, conservative pundit.

As the night continued, the mutual admiration between the hosts became increasingly evident, with Stewart praising Colbert on his ability to render his character in real time, and how he is “a rarity in the comedy business.” Case in point: in 2001, Reverend Al Sharpton was booked on The Daily Show, but never actually appeared. Colbert was asked to step in last-minute, and ended up pretending to be Sharpton for an entire interview.

Stewart revealed that his favorite guest was Bob Dole, but also mentioned the only guy who “really creeped everyone out was Hugh Grant.” Stewart did not get specific when asked about his biggest perceived failure, saying he chose not to view the show in individual moments. He mentioned having enjoyed films like Goodfellas, The Shawshank Redemption, and Cinema Paradiso, and briefly touched upon his idol, David Letterman, and how going on Letterman’s show was a big deal for comics in his generation.

One of the more sobering anecdotes centered on author Salman Rushdie, musician Yusuf Islam (formerly known as Cat Stevens), and the 2010 Rally to Restore Sanity. Yusuf performed at the rally alongside Ozzy Osbourne and The O’Jays, but what Stewart hadn’t known was that in 1989, Yusuf had allegedly endorsed a fatwa against Rushdie for the publication of The Satanic Verses. Stewart spoke to both Yusuf and Rushdie in an attempt to set things straight, but Rushdie was still greatly disappointed in Yusuf’s invitation to the rally. Stewart regrets the misunderstanding, and commented that “death for free speech is a deal-breaker.”

Stewart and Colbert’s enthusiasm proved to be magnetic for the audience during the question and answer portion. One audience member, who had worked in the World Trade Center, offered Stewart sincere thanks for his cathartic post-9/11 monologue. Another asked for their favorite 2012 election moments. Colbert’s was Barack Obama’s re-election, and Stewart’s was Clint Eastwood’s infamous conversation with an empty chair at the Republican National Convention. One woman even asked for newlywed marriage advice, which elicited a particularly hilarious story from Colbert regarding his wife, Evie, and a dream about ghosts.

I was able to ask Colbert if he thought his presidential campaigns followed in the footsteps of Pat Paulsen, a 1960s TV personality who also ran for office. Colbert said he loved Paulsen, but Stewart was more critical: “Pat Paulsen was playing checkers. This man,” and he gestured to Colbert, “plays chess.” On toeing the line in interviews—both had agreed that the ideal guest is “someone who will advocate”—Stewart said he enjoys getting human moments from his guests, and likes to make his interviews “a conversation, not a trap.” Colbert echoed him, saying, “Talking somebody into a corner is miserable work.”

Stewart and Colbert are hysterical enough on their respective shows, but putting them together in the same room can only be described as pure electricity. Their fierce devotion to their work and to each other was clear as the audience laughed along with their barbed wit and twisted humor. Stewart put his relationship with Colbert rather succinctly when he said, “It’s nice to have a brother in the business.”