THIS EVENT IS SOLD OUT

Come see all the Academy-Award nominated short films! They will be screened on the actual day of the Awards, Sun. Feb. 24th, 2013 from 10am – 5:30pm at Montclair State University, in University Hall, Room 1070 (directions below).

For the past three years, these “underdogs” of the Academy have been screened at MSU as a presentation of the Underdog Film Festival along with Montclair State University’s Film Program. This year, its organizers join forces with the Montclair Film Festival and MSU’s newly created School of Communication and Media to celebrate these rarely seen gems.  Tickets are $12 for a half day or $20 for the full day. MSU students and faculty attend free with valid ID.

MAGGIE SIMPSON IN “THE LONGEST DAYCARE” (USA, 5 min.), Director: David Silverman.  Maggie Simpson spends a day at the Ayn Rand Daycare Center where she is diagnosed at an average intelligence level. Longing to be grouped with the gifted children, Maggie finds her destiny by rescuing a lonely cocoon from Baby Gerald, who is busy smooshing butterflies.

ADAM AND DOG (USA, 16 min.), Director: Minkyu Lee.  The story about the dog of Eden. What happened in those first days of Creation that made Man and Dog so inseparable? The dog, as he lives through this curious world, encounters a strange creature; a human being named Adam – and with that discovers a new found connection to the world.

HEAD OVER HEELS (UK, 10 min.), Director: Timothy Reckart. After many years of marriage, Walter and Madge have grown apart: he lives on the floor and she lives on the ceiling. They live separate, parallel lives, never talking, barely even looking at each other. When Walter tries to reignite their old romance, it brings their equilibrium crashing down, and the couple that can’t agree which way is up must find a way to put their marriage back together. 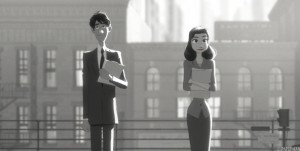 PAPERMAN (USA, 7 min.), Director: John Kahrs.  From first-time Director John Kahrs, “Paperman” tells the story of a lonely young man in mid-century New York City, whose destiny takes an unexpected turn after a chance meeting with a beautiful woman on his morning commute. Convinced the girl of his dreams is gone forever, he gets a second chance when he spots her in a skyscraper window across the avenue from his office. With only his heart, imagination and a stack of papers to get her attention, his efforts are no match for what the fates have in store for him.

ACADEMY AWARD-NOMINATED LIVE–ACTION SHORT FILMS 2013 (10:55 – 1:00)
Please note: due to adult themes and violence, this program is not appropriate for younger children.

DEATH OF A SHADOW (Belgium/France, 20 min.), Director: Tom Van Avermaet.  Soldier Nathan died during World War I. A strange collector imprisoned his shadow and gave him a new chance: a second life against 10,000 captured shadows. It is love that guides him, as his purpose is to meet Sarah again, the woman he fell in love with before he died. But then he discovers that she’s already in love with someone else, jealousy clouds his mind and pushes him towards a bitter decision, not without consequences.

HENRY (Canada, 21 min.), Director: Yan England.  Henry, a great concert pianist, has his life thrown in turmoil the day the love of this life, Maria, disappears mysteriously. He’ll then discover the inevitable verdict of life.

CURFEW (USA, 19 min.), Director: Shawn Christensen.  At the lowest point of his life, Richie gets a call from his estranged sister, asking him to look after his nine-year old niece, Sophia, for the evening.

BUZKASHI BOYS (Afghanistan/USA, 28 min.), Director: Sam French.  Set against the dramatic landscape of contemporary Afghanistan and the National sport of Buzkashi – a brutal game of horse polo played with a dead goat – Buzkashi Boys tells the coming of age story of two best friends, a charismatic street urchin and a defiant blacksmith’s son, who struggle to realize their dreams as they make their way to manhood in one of the most war-torn countries on Earth. Shot on location in Kabul city by an alliance of Afghan and international film makers, Buzkashi Boys is a look at the life that continues beyond the headlines of war in Afghanistan. 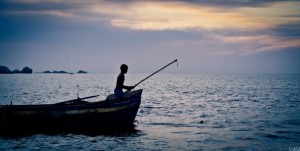 ASAD (South Africa/USA, 18 min.), Director: Bryan Buckley.  Set in a war-torn fishing village in Somalia, an all-Somali, refugee cast brings to life this coming of age fable of a Somaliboy who is faced with falling into the pirate life, or rising above to choose the path of an honest fishing man. 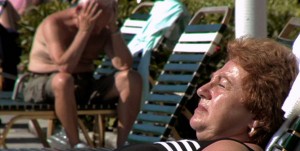 KINGS POINT (USA, 39 min.) Director: Sari Gilman.  With KINGS POINT, director Sari Gilman tells the stories of five seniors living in a typical American retirement resort-men and women who came to Florida decades ago with their spouses by their sides and their health intact, and now find themselves grappling with love, loss and the universal desire for human connection. A bittersweet look at our national obsession with self-reliance,Kings Point explores the dynamic tension between living and aging-between our desire for independence and our need for community-and underscores our powerful ambivalence toward growing old.

MONDAYS AT RACINE (USA, 39 min.) Director: Cynthia Wade.  Every third Monday of the month, in brassy Long Island, sisters Cynthia and Rachel open up their hair salon, called Racine, and offer free beauty services for women undergoing chemotherapy. Determined to make their customers feel beautiful, the glamour duo knows that Mondays at Racine goes beyond purple painted toes or a frothy facial. The sisters are determined to give women who are losing their hair, eyebrows and eyelashes a sense of normalcy and dignity in a traumatic and uncertain time. The story of what hair means in our culture quickly unfolds into an unexpected look at womanhood, marriage and survival.

INOCENTE (USA, 39 min.) Directors: Sean Fine & Andrea Nix.  INOCENTE is an intensely personal and vibrant coming of age documentary about a young artist’s fierce determination to never surrender to the bleakness of her surroundings. Hers is not just a story of survival, but of resilience. At 15, Inocente refuses to let her dream of becoming an artist be caged by her life as an undocumented immigrant forced to live homeless for the last nine years. Color is her personal revolution and its extraordinary sweep on her canvas creates a world that looks nothing like her own dark past – a past punctuated by a father deported for domestic abuse, an alcoholic and defeated mother of four who once took her daughter by the hand to jump off a bridge together, and an endless shuffle year after year through the city’s overcrowded homeless shelters. Told entirely in her words, we come to Inocente’s story as she realizes her life is at a turning point, and for the first time, she decides to tale control of her own destiny. Inocente is both a timeless story about the transformative power of art and a timely snapshot of the new face of homelessness in America — children.  The Montclair Film Festival was proud to present this film in as part of its inaugural festival line-up.

REDEMPTION (USA, 35 min.) Directors: Jon Alpert & Matthew O’Neill.  In the documentary Redemption, filmmakers Jon Alpert & Matthew O’Neill closely follow this growing army of New Yorkers whose treasures are in the trash. The film is a chance to meet the marginalized masses we often rush past on our way to catch a bus or make a meeting. They are poor but proud New Yorkers – people who don’t ask for a handout – people whose hands rake through the discards of our lives – building their lives one nickel at a time. 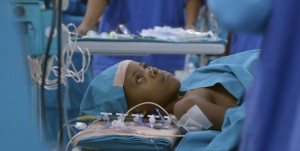 OPEN HEART (USA, 39 min.) Director: Kief Davidson.  Eight Rwandan children leave their families behind to embark on a life-or-death journey seeking high-risk heart surgery in Sudan. Their hearts ravaged by a treatable disease from childhood strep throat, the kids have only months to live. Open Heart reveals the intertwined endeavors of Dr. Emmanuel Rusingiza, Rwanda’s lone government cardiologist, as he fights to save the lives of his young patients, and Dr. Gino Strada, the Salam Center’s head surgeon who must convince Sudanese President Omar Al-Bashir’s government to keep Africa’s only link to life-saving cardiac surgery free of charge for the millions who need it.

Directions to University Hall:   From Valley Road, turn onto Normal Avenue and turn right onto College Avenue to enter the University. College Avenue will bend to the left and and then you will see the Red Hawk Deck parking garage adjacent to the Alexander Kasser Theater.  After parking, exit the garage from the Fifth Floor (follow neon green signs) onto the walking path that leads directly to University Hall (white building).  Enter through the front door and walk straight back to room 1070.  You’ll see us in the lobby.

When you arrive at University Hall, please ask us to stamp your parking ticket which will enable you to park for the day for $5.

FOR LUNCH/SNACK OPTIONS ON CAMPUS – THERE ARE 3 OPTIONS OPEN TODAY:

Cafe Diem at the Sprague Library