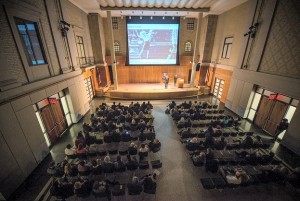 The Montclair Film Festival will be bringing more and Moore to its second annual event with an impressive line-up of 80 anticipated titles and a visit from over 100 special guests including Michael Moore, Lake Bell and Ice-T.

“The 2013 MFF will be a work of art complete with a colorful palette of films and talents from all over the world,” MFF’s Executive Director Raphaela Neihausen and Artistic Director Thom Powers announced on Thursday night during a special presentation at the Montclair Art Museum. The 2013 Festival is a mélange of hot titles from top festivals like Sundance, Toronto and New York with its own distinct NJ flavor.

Before the MFF party officially kicks off on April 29th, guests at the museum’s Free First Thursday Nights Program were given a sneak preview of this year’s exciting events and films. Everyone enjoyed live music from the MSU John J. Cali School of Music Jazz Studies Program and put the popcorn aside for gourmet fare from the French Quarter and Taqueria Auténtica. Neihausen and Powers gave the first public presentation of the second annual festival’s line-up and gave guests a behind-the-scenes look at how the films are selected. 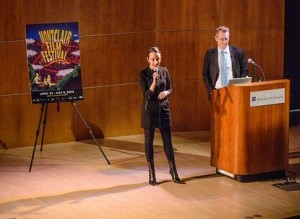 So how did Neihausen and Powers and the MFF team pick this year’s crop of talents? “We watch hundreds of films over the course of the year. We attend festivals like Sundance, Cannes, Toronto and New York. We’re always looking for what’s the best from those places,” Powers said, adding: “Plus, we received around 200 films from an open submission process.”

The MFF runs April 29th – May 5th. For all of the festival scoop, as well as ticket availability and scheduling, check back here often. Sit down, relax and . . . go buy your tickets before they sell out!