While a couple of Mel Brooks fans waited in the Claridge Cinema lobby to see Mel Brooks: Make A Noise, their desire for a film filled with the iconic comedian’s shtick was overheard: “I hope we’ll get to see him in action, he makes everything funny,” said one of them. “Well, yes, and I hope we see some of his movie bits. Cloris Leachman was so bizarre in Young Frankenstein . . . and the bean scene from Blazing Saddles . . . can’t forget that one,” said the other fan, smiling at his friend. 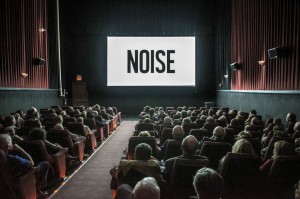 Neither one of those Mel Brooks admirers ended up being disappointed. Mel Brooks: Make a Noise, a new addition to the American Masters series, delivers candid conversations with 86 year old Brooks combined with a selection of hilarious clips from his movies and theater work, as well as interviews about him given by celebrities including Carl and Rob Reiner, Tracey Ullman, Barry Levinson, Richard Lewis, Joan Rivers and David Steinberg.

The screening was hosted by Montclair Film Festival Chairman and Co-Founder, Bob Feinberg. He explained that Brooks is one of only fourteen people who have ever won the “EGOT.” The meaning of that string of letters was unfamiliar to most audience members . . . maybe two people, at most, raised their hands when asked if they knew what it means. It stands for Emmy . . . Grammy . . . Oscar . . . Tony.

American Masters is an award winning Thirteen/WNET biography series that celebrates our arts and culture. Susan Lacy, creator and Executive Producer of the series, including Mel Brooks: Make a Noise, was present along with the film’s Director, Robert Trachtenberg. Feinberg is Vice President and General Counsel of WNET which made the event a bit of a family affair.

Lacy was interested in making a movie about Mel Brooks for a number of years before he finally consented to do it. “I asked my friend, Robert Trachtenberg, who is very funny, to direct it,” she said. “When he’s not making movies, he’s a photographer, a really good one, with his photos in Rolling Stone and Esquire,” added Feinberg. It took four months and thirty hours of interviews to complete Mel Brooks: Make a Noise, which is 85 minutes long. Trachtenberg conducted the interviews with Brooks. They met once a month. 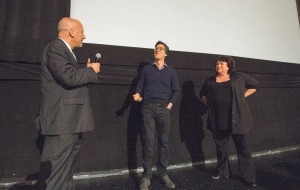 Trachtenberg has also done American Masters films on Cary Grant and Gene Kelly. During the Q & A following the film, Feinberg asked the director how working with Mel Brooks was different from working on the Grant and Kelly films. “He’s alive,” said Trachtenberg, getting a laugh from the audience. He saw his experience with Brooks as a golden opportunity to get much authentic material out of him. Trachtenberg shared that Brooks is a man who holds back. “He has a problem saying to your face what he is feeling,” he related. An area that Brooks would not talk about was his marriage to actress Anne Bancroft who died in 2005 at the age of 73. Losing her at such a relatively young age is still too sad for him to publicly discuss.

Lacy also found Brooks to be somewhat shy. She was shocked that he felt awkward about seeing himself in the American Masters series in the company of greats like Ernest Hemingway because he didn’t think he qualified to be among people of that stature.

The expectation for Mel Brooks: Make a Noise is that it be funny, and it is, as evidenced by the rippling stream of audience laughter at the screening. Viewers were quiet when Brooks answered questions, waiting for the punch lines, then, when the humorous answers came, they chuckled and sometimes guffawed, especially when viewing film clips that are engraved in the memories of those who know his films well, such as The Producers, High Anxiety, Blazing Saddles, Young Frankenstein, and History of the World, Part 1.

The film reminds us, as it chronicles his artistic evolution and achievements, that Mel Brooks is not only a funnyman: he is a film director, screenwriter, actor and producer. As Anne Bancroft said about her husband in an endearing clip from Mel Brooks: Make a Noise, “Every time I heard the key in the door, I knew the party was going to start.”