Writer and director Musa Syeed had never been to Kashmir before the creation of Valley of Saints. During the Q&A session after the film, he admitted with a sheepish grin that he didn’t even speak Kashmiri while growing up in Bloomington, Indiana. 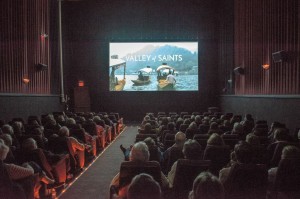 Syeed’s family fled Kashmir after his father was held as a political prisoner there in the 1960s. He saw the creation of Valley of Saints as an opportunity to reconnect with their roots.

Armed with a loose idea of the film he wanted to make, he traveled to Dal Lake in 2009 and spent a year absorbing the culture. It was there where Valley of Saints began to write itself—the quiet, watery landscape lending itself as the perfect setting.

Valley of Saints tells the story of two young men stranded in a village slung somewhere between deep-rooted tradition, the strain of poverty, and the environmental consequences that have emerged as a result.

Timid boatman Gulzar and his best friend Afzal dream of catching a bus to a better life. But their plans are put on hold when the military enforces a curfew in response to escalating protests. While trying to stave off boredom in their confinement, they happen upon a beautiful young environmentalist, Asifa, who is seemingly content in her isolation while conducting research on the ailing lake.

Tensions run high when romance begins to blossom between Gulzar and Asifa. Afzal sees his friendship and chances of escape threatened. As the weeklong curfew draws to an end, Gulzar is forced to navigate the uncertain waters between his love for Asifa, the life he has always known, and his desire for freedom.

According to Syeed, casting was done right in the village. Gulzar Ahmed Bhat was an actual tourist boatman on DalLake and Mohammed Afzal, a family friend, was originally brought on as a translator. As luck would have it, the two men had incredible chemistry and the character of Afzal was written into the script.

Even the curfew shown in the film was real—the crew was kept small in order to avoid unwanted attention, although filming was not without its tense moments. 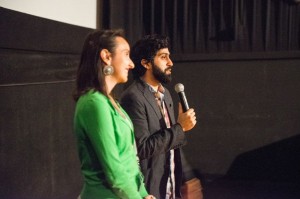 “We had some intense negotiations with people who were trying to blackmail us,” Syeed recounted during the Q&A. Despite this, the film was completed and soon made its rounds through the festival circuit.

After winning the Sundance Film Festival World Dramatic Audience Award and the Alfred P. Sloan Prize, Valley of Saints was picked up for distribution by Paladin. President Mark Urman was also in attendance at Wednesday’s screening; he spoke fondly about the impression the film and Syeed left on him.

“I had a very definite sense that the person who made this film was a wise old man,” he said. “Then I was told he was in his twenties—and he was American!”

Valley of Saints has screened at various film festivals throughout the world, from Sundance to Hamburg to Dubai. With the help of Paladin and an endowment from the Alfred P. Sloan Foundation, it will be seen in independent theaters and art house cinemas across the country—but Urman has even higher hopes for the film’s future.

Click here to listen to audio of the Q&A Session.