Hey Bartender screened at the Montclair Film Festival last Friday follows the stories of two bars, a struggling suburban corner bar and a thriving NYC hotspot. It portrays the owners and bartenders and what motivated them to do what they do. The history of the bartender since prohibition is examined and the evolution of the bartender from the simple server of drinks to the crafter of cocktails is explored. 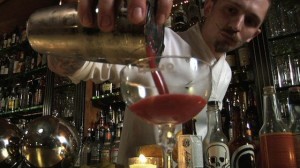 The story lines are interspersed with sound bite interviews of many famous NYC bar owners giving a historical perspective from the days of the three martini lunch, the disappearance of barkeep creativity in the seventies and eighties when alcohol and syrup were the protocol, to the modern day craft cocktails made with fresh and locally harvested ingredients.

Following the film, director Doug Tirola, producer Susan Bedusa, and bartender Steve Schneider (Employees Only, NYC) who was featured prominently in the film spoke and took questions from the audience. Everyone congregated outside to continue the discussions and many continued on to Egan & Sons for a much needed cocktail. 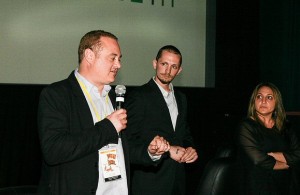 Click here to listen to audio of the Q&A session.