In the final scene before the credits roll, the mysterious rock star character of Every Word Handwritten declares, “This, by far, has been the most fun I’ve ever had.” Judging by the reactions of the delighted audience, there was plenty of fun to be had at Montclair Film Festival’s presentation of NJ Shorts: Musical Journeys on Friday evening at the Clairidge Cinema. The series of shorts included three films: Gifted & Talented: A Musical Short Film, Every Word Handwritten, and Asleep at the Wheel: Then and Now.

Gifted & Talented tells the story of virtuoso teenage keyboardist and budding composer, Wyatt, who is chosen to attend a camp for gifted musicians. Wyatt instantly develops a crush on fellow camper Nikki, but his timid nature keeps him from asking her out. No banal high school musical is this – it is told in a refreshing visual style that occasionally superimposes handwritten musical notation over the action and delivers original musical numbers. 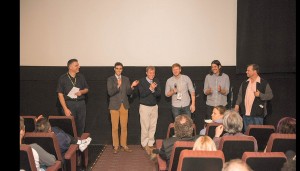 Directed by Jeff Luppino-Esposito and Jamie T. McClelland, the short is the latest from The Online Musical, a collective that creates interactive online musicals. The group began with students at the University of Virginia, who thought of delivering original musicals with an engaged online audience. Their first effort Musical: The Online Musical, incorporated suggestions from online commentators about the musical’s content, songs, and character into each new episode.

This was followed by the short Every Word Handwritten, which followed the lives of several individuals connected by one vinyl record. Produced by the band Gaslight Anthem and directed by Kevin Slack, the film is a love letter to vinyl records and the heyday of record stores. It was originally planned as a music video for the band’s 2012 album Handwritten and later expanded into the original short film.

Beginning in the 1960s with the shot of a rock band playing out to a packed house, the film then traces the journey of an album produced by that band. A young woman buys the album for her sweetheart, who is going to Vietnam. She writes him a love letter on the sleeve, and so begins a tradition of writing messages on the album’s sleeve as it changes hands. When the current owner of the album decides to sell it, history comes full circle as the original rock star of the album happens upon the record.

Asleep at the Wheel: Then and Now is about a different kind of band in the sixties: dubbed the “Western Swing Beatles” for a time, Asleep at the Wheel has been performing and recording music for over 40 years. Yet for all that time only one thing has remained unchanged about the band – Ray Benson, who never left despite considerable troubles. Facing financial hardship, changing musical taste, and the realities of constant tours, the band still continues to bring Western Swing to audiences.

Benson began the band on a farm in Paw-Paw, West Virginia with self-identified “hippies” with an interest in Western Swing and nature. From the remote farm, it was then quite a step to the wilds of Berkeley, California, where the band struggled to make ends meet. An initial record contract with United Artists failed to catch on, so the band moved to Texas to find a more receptive audience for their music.

For years Texans came out in droves to see the band, but another dry period came when disco hit. Still, Benson witnessed another comeback in 1987 with a Billboard hit and continues to makes music with the band today. Asleep at the Wheel: Then and Now, the longest of the three short films, also seemed to earn the most laughs of the evening. It was easy to see why, since the documentary short directed by Dan Karlok was filled with endless humorous anecdotes from the band.

All in all, a trio of shorts that tickled the audience and engaged their musical sensibilities.