The crowd seemed excited to hear Michael speak, as a range of discussions were developing while we all entered the back room behind the café at the Montclair Public Library–primarily about Breaking Bad, but also about Michael’s other projects, including: 30 Rock, and CSI, Crime Scene Investigation.

Michael began his discussion with how he first got involved with his current project, Breaking Bad, and how if it wasn’t for his wife’s insistence we probably would all be watching Breaking Bad with another cinematographer calling the camera shots. 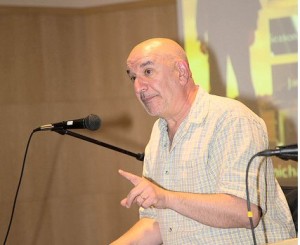 Michael spoke in great detail about a number of techniques he used most successfully on Breaking Bad, and more importantly he discussed why these techniques worked for him (and how they could have possibly not worked in other situations). One of the techniques that Michael uses extensively on Breaking Bad is the ‘wide shot’,  which typically shows the entire object or human figure and in relation to its surroundings. It has been suggested that long-shot ranges usually correspond to approximately what would be the distance between the front row of the audience and the stage in live theater. It is now common to refer to a long shot as a “wide shot” because it often requires the use of a wide-angle lens.

Later in his discussion Michael brought in the importance of camera types and lens choices. The fact that Breaking Bad almost exclusively utilizes ‘old school’ techniques of filming, processing, and developing a scene astounded some, surprised others . . . but delighted all in that those techniques could produce such high quality television. 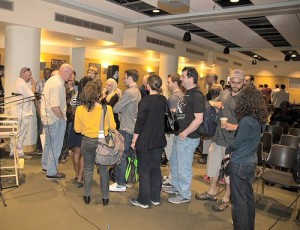