A concussion is a ‘jarring’, or a shaking up of the status quo, and that’s what the movie Concussion did on May 5th as the second Montclair Film Festival drew to another successful close at the Bellevue Theater in Upper Montclair.

As I entered the theater 45 minutes early, there was already a line of people outside waiting to get into the theater and see what local filmmaker Stacie Passon had in store for them. People were talking about this film as it had generated quite a buzz . . . especially since it had been filmed locally in and around Montclair. This was obviously the hit of the night, eclipsing even the big budget, commercially produced film at the Bellevue.

The buzz generated is well-deserved, as it was acclaimed at The Sundance Film Festival (where it initially debuted) as “superb” by critics. 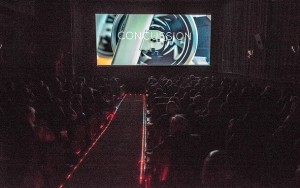 Friends, family and filmmakers alike showed up to be entertained by this sometimes light-hearted, sometimes psychologically deep dramatic-comedy, which did a masterful job of displaying a midlife crisis in a humorous, insightful way.

Robin Weigert (Deadwood) gives a stunningly dramatic performance of a forty-something lesbian housewife who after suffering a concussion gets shaken into a new reality, that there is something more than her life at home and work. As she explores her new reality, she gains a new perspective on her own psychology and eventually taking on the double-life of a high-end escort. 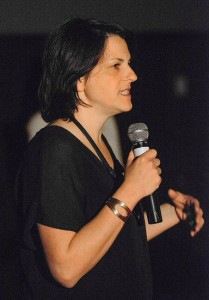 After the film, Ms. Passon answered a number of insightful (often humorous) questions about the film. Her praise for Ms. Weigert and those who assisted her with this film was boundless.