Enjoy the beach while you can, because the ocean seems to be reclaiming what was once its own. The Montclair Film Festival featured the world premiere of Shored Up on Sunday, May 5th at the Montclair Kimberly Academy. The crowds turned out to hear what this important film had to say . . . and the message wasn’t a pleasant one for beach goers and beach residents. 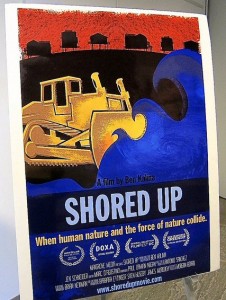 Beach erosion and the rise of sea level are very serious issues that need to somehow be addressed, and after the tragedy of Superstorm Sandy this is all the more evident. But this film went beyond beach erosion, it made a statement about the danger that people are in living on the beaches, the danger they are putting their investments in, and their futures. Set on Long Beach Island, NJ and the Outer Banks of North Carolina this film really hits home for a lot of people who are affected by the Nor’easters and hurricanes that we along the United States’ Eastern Coastline experience each year. The film asks some of the difficult questions: Whether beach replenishment is doing more harm than good? What is the science really saying about global warming and why are some politicians so resistant to the facts? What is the true financial cost of our efforts? And many others. 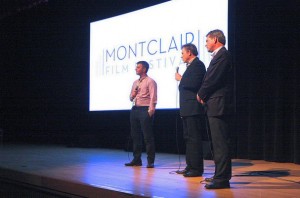 Director Ben Kalina and Mike Schneider appeared on stage for a Q& A session and a number of the audience members expressed concern over a wide range of subjects from people losing their homes to why must our tax dollars contribute to ‘shoring up’ the beaches around million dollar luxury properties so that the wealthy can live in safety. We were joined in the audience by a number of the crew who assisted Mr. Kalina; Executive Producer Brian Newman, Cinematographer Jen Schneider, and Editor Marc D’Agostino.