Gideon’s Army follows the lives of three new young public defenders. Filmmaker and former litigator Dawn Porter chronicles the trials and tribulations of neophytes Travis Williams, Brandy Alexander, and June Hardwick as they reconcile advocacy of impoverished clients with the harsh reality accompanying it. Each share reasons for becoming defenders and face myriad tests in emotionally, psychologically, and financially sustaining themselves in their work. 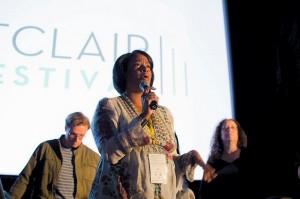 Caseloads of 120 to 180 clients each do not smother the young attorneys’ resolve to go the extra mile for clients, regardless of what they must forgo and forgive.  “All I do is this,” says Travis, a first year devoted public defender in Georgia, confirmed by footage showing his office directly next door to his apartment.  “Either this is your cause or this ain’t,” is another of his battle hymns. June, based in Mississippi, harbors a boots-on-the-ground approach in working for her clients because they are “all counting on me for being there for them.” She regards her clients as kinfolk; because several divulge of previously having inadequate counsel, she tries to redeem the profession and their faith in the system. Brandy, based in Georgia, takes on a mentoring role, particularly with adolescent clients naïve to how the system works. She even visit clients when lonely being behind bars. Yet her experience, and like so many of her counterparts, is that sacrifices are not always reciprocally respected.

While sensationalized court cases dominate and saturate the airwaves, Porter deftly unearths through trial footage and interviews the unglamorous and unfair world of public defenders. Travis must defend a client against armed robbery charges without any DNA evidence.  Because the taking of a witness deposition is not required in Georgia, Brandy must prepare her case for her client, an adolescent also facing armed robbery charges, without knowing what the prosecution’s witnesses will say. With minimal resources and routinely problematic circumstances, public defenders must pull effective defenses from meager means. Where are the bright lights when you need them?

This documentary drives the sympathetic point that public defenders need bolstering too, and spotlights the only program nationwide providing it. The Southern Public Defender Training Center (now Gideon’s Promise) mentors fledgling frontiersmen in the legal wilderness. During one meeting Brandy unbosomed her dilemma, telling of a client’s graphic yet nonchalant detailing of raping his daughter, triggering in her a collision of her humanity with her growing ambiguity over whether to remain a public defender. With only 15,000 in service nationwide, the movie drives home the point that public defenders, like water, are a resource that should not be squandered.  The personal and professional lives of Travis, Brandy, and June somewhat justifies why 1 out of 3 public defenders leave the profession.

In Gideon’s Army, Porter situates the narratives of the defenders’ lives against the larger social, economic and ethical social landscapes within which they occur.  For poor clients, existing economic hardships become exacerbated. Once being jailed, lack of employment results in them losing jobs, homes, cars, and child custody. In one Georgia county high bonds are prohibitive of clients sustaining livelihoods and lives; a bond for shoplifting is $40,000.  One of Brandy’s adolescent clients was eligible for a pre-trial diversion program if his mother could post $3000 bond, which she could not muster. Consequently, he pled guilty. Working within systems with minimal resources and questionable executions of due process, Porter makes us privy to the underbelly of the pursuit and metering out of justice received.

Amidst their trials and tribulations Porter also reminds us that public defenders have human needs too. June is a mother who, once her student loans and bills are paid, is left with $300 for monthly expenses. She candidly shares of one time writing a check for groceries that she knew she did not have money in her account to cover.  Brandy, facing student loans of six figures, is shown putting $3 of gas in her car, hoping it will be enough to get her back and forth from home to work for the next two days. Travis seeks a life outside of work, seeking to bring fulfilling relationships into his life, and once getting them balancing them with his work.

The blessing emanating from the grievance of Clarence Earl Gideon not receiving counsel has led to us all having now the privilege of legal representation during trial. But Porter craftily unfolds throughout the movie the layers of complexity that underlie delivering and receiving it.  Each attorney learns they must navigate and negotiate the intersection of principles and actuality, as pursuit of justice exacts costs on defender, client, system and nation. 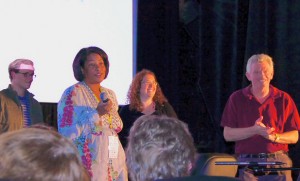 A fruitful dialogue and exchange of information ensured after the screening.  An impromptu and informal panel of Dawn Porter (Director, Producer), Julie Goldman (Producer), Summer Damon (Co-Producer), Paul Fishman from the US Attorney for New Jersey’s office and another public defender were present to field questions. One viewer asked Porter how the film was made and the attorneys selected. Through her connections with Gideon’s Promise, she was able to interview and select participants for the film; although outreaching to prosecutors, all declined participation.  Another viewer inquired about funding sources, which Porter credited the Ford Foundation and HBO as substantial contributors.

When asked of the number of cases she followed, Porter shared interesting stories of the rigor she was put through in order to even get to film cases. Georgia requires a motion requesting permission, but one judge who eventually accommodated filming, requested formal arguments be presented. Less of a challenge was experienced in Mississippi where June is based, as she simply asked permission of her judge. Another viewer asked if pro bono representation is provided in New Jersey, which the representative from the US Attorney for NJ office explained that all attorneys within the state are supposed to provide some sort of pro bono counsel, explicating how that occurs. However, he detailed how because of the sequestration, his own office is furloughed 11 days. Another viewer made comparison of what occurred in the movie with what is transpiring in the Bronx where the magnitude of caseloads is causing a backlog.