To create a fine wine, you first need what the French call terroir (what the elements of the soil impart to the taste of the grapes), along with cultivation and care. To raise a child, you need much the same thing: the right “growing conditions,” plus affection and attention. While Paul de Marseul (Niels Arestrup, of War Horse), the central character in Gilles Legrand’s Tu Seras Mon Fils (You Will Be My Son) lavishes plenty of love on the fruit of his vines, he treats his son and heir, Martin (Lorànt Deutsch), only with destructive, poisonous acidity. The catch in all this: in the case of wine, it’s bad, or difficult, soil that often produces the best wines. The grapes’ sweetness develops from the struggle. With humans, however, the outcome remains uncertain: a person can either emerge stronger from the battle—or get destroyed in the process. 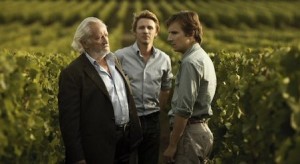 Opening after Paul’s death, and with the cremation of his body, the film then goes back in time to examine the beginning of the end: when Paul learns that François (Patrick Chesnais), his trusty estate manager and dependable right-hand man, is dying of cancer. Martin, desperate for his cold and domineering father’s approval, begs for the chance to step up and take a more active role in the business. Paul seems at first to grant Martin’s wish—but in reality he behaves in a way that sets Martin up for certain failure. Never having loved his child, Paul hasn’t cultivated him for the succession; unprepared for the job, Martin makes crucial errors that Paul reacts to with withering scorn.

When François’ handsome son Philippe arrives from the US, where—in a sly touch—he’s been managing director Francis Ford Coppola’s vineyard, the stage is set for a battle between the two contenders for the throne. But you can’t fully grasp Paul’s cruelty without understanding French law, which Legrand, who attended the screening, explained: in France, unlike the US, the estate MUST go to the children, minus only a small amount allowed for charity. If you want to prevent your “blood” family from inheriting, you’d better be prepared to try some incredibly complex legal maneuvers while you’re still alive. And that is exactly what Paul does, raising the ante step-by-step as the film proceeds. As he embraces Philippe ever more tightly, Martin begins to fall apart—which Paul, in a form of circular reasoning, then uses as even further justification for his actions.

Though the drama centers on the men, the female parts are also richly drawn, especially Alice (Anne Marivan), Martin’s strong, loving, and perceptive wife—and the only character who is capable of fully standing up to Paul. 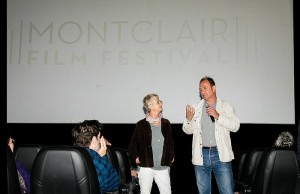 In advance of the film, Gilles Legrand had described You Will Be My Son as “a love story . . . but there is no love,” and after the screening he returned for a short Q & A session to elaborate on that comment and other facets of the film. When asked about whether there was something special about Saint-Émilion, the region in which he’d set the story, Legrand asserted that he felt it could have taken place anywhere—but the wine was important as it came from ground, from the earth. Regarding the love story statement, he mused that “when you have kids you’re supposed to love them—and usually you do . . . But sometimes when you grow up, it’s not so easy. You are not obliged to love your father. In particular, Legrand noted that how especially difficult it could be to grow up with a charismatic man, as Paul is, and that such a man’s power can lead to a fragile child. “It’s very easy to destroy them.” Legrand, himself a father, wryly admitted that his wife has warned him that in the end his son “will do what he wants” when he grows up.

Asked about his choice of Niels Arestrup as Paul, and whether he was chosen straightaway, Legrand admitted he tried a few actors. Even Gérard Depardieu was interested in the part, but for Legrand, having a star who loved the script “was everything.” Now he can’t see anyone else other than Arestup in the role.

The uniquely French legal issues explored by the film interested one member of the audience, who asked about disowning a child. Legrand reasserted that nothing could be done to stop the family inheriting unless you yourself jump through hoops during your lifetime; you’d have to set up contracts with your business, or “adopt” someone in order the circumvent the rules. (Though Legrand didn’t mention this, such machinations could lead to a very King Lear-type scenario in which you give someone your assets during your life only to find yourself betrayed.)

Another person asked about the film’s considerable and surprising humor, always there even in the saddest moments, and wondered whether it was in the script itself. Legrand said it was, and that he’d built it into the characters. Without the humor, he felt the film could go “down, down, down”; he viewed the blend of drama and lightness as something necessary to keep spectators engaged, and particularly pointed to the Coen brothers as directors who mastered this mix of emotions.

On a practical note, the movie took three months to shoot, costing somewhat over one million dollars—definitely low by Hollywood standards. After briefly addressing questions on wine and the vineyard owners, as well as the quality of the film’s translation (he threw that to members, who generally thought was good), Legrand responded to a final question about whether there might be a sequel. Laughing, Legrand divulged an alternative ending that he’d had in mind, one that went further than the current finale. Without revealing too much (and spoiling this film for anyone who hasn’t yet seen it), I will only say that the change would have sent the audience out of the theater with a very different feeling. Not better or worse . . . but different.