Amid the seasoned and amateur independent filmmakers headlining the Montclair Film Festival’s marquee, young students too had the chance to showcase their films in the Kidz Shortz contest. Challenged to produce a short around a single prompt – “Freedom…to me” – 4th through 12th graders from across the country submitted their unique interpretations showcasing the quality and craft of their work. Nine of them were selected to screen on the Festival’s closing day. 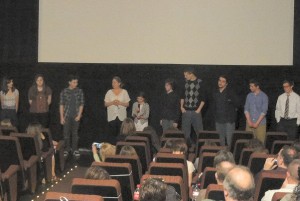 The audience reactions were enough to prove that the young directors had succeeded in their story telling, each with his or her own flair for theatrics. The students demonstrated not only depth in their scripts, but also innovation in their techniques. In a Q & A session following the screening, the students revealed the inspirations they drew from their lives and the tools they used, ranging from an iPad to a DSLR Canon as well as Adobe After Effects.

There is no doubt that future festivals will see the bar raised to new heights as these storytellers grow and mature their skills even further.