It would seem difficult in the era of laptops and cell phones to describe electricity as a luxury of modern technology. However, like many basic necessities industrialized countries often take for granted, there are still places in the world where the power to cook food and heat a home are precious. Rafea: Solar Mama follows the story of a village in Jordan and the incredible journey of Rafea, a Bedouin woman who becomes a solar engineer. Fresh from its accolades at DOC NYC, Rafea: Solar Mama made its New Jersey premier at the Montclair Film Festival on Sunday, May 5 at the Clairidge Theater. 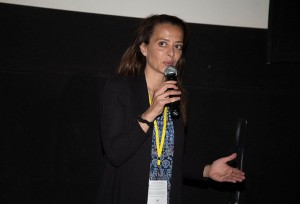 Director Mona Eldaeif attended the screening for a Q&A session after the film and was greeted with a standing ovation when she stood to take questions. Born in Cairo, Egypt, Eldaeif graduated from NYU and has done work on Control Room, A Wedding in Ramallah, and Her Name is Zelda. Her co-director Jehane Noujaim was similarly born in Cairo and directed Startup.com and Control Room. In her discussion with the audience, it became clear how deeply they had been moved by Rafea’s story.

In the remote village of Rawat Bandan in Jordan, Rafea was prevented from going to school after only five years of education. According to Bedouin tradition, it is considered shameful for a girl to have an education beyond the age of 10. In a poignant moment Rafea looked at her daughters and asked, “Is it not shameful that the youth of these girls is wasted without work?”

The desire to work and help raise the standard of living not only for her children but for her entire village became an all-consuming one for Rafea. She was chosen, along with another woman in the village, to take part in a solar engineer training program for illiterate women in India called the Barefoot College. While faced with numerous setbacks due to the restrictive patriarchal culture of her village, she completes the training program and returns with her newfound skills.

Not without its light moments, the film became especially humorous when it showed the two Jordanian women interacting with others at the college. Each year the Barefoot College chooses 80 women from around the world to participate in a six month training program in solar engineering. Upon completion, the women return to their villages and in turn train other women, providing solar electricity to their communities. The audience enjoyed more than one laugh witnessing the language barrier missteps between the diverse women at the college. Yet despite the initial misunderstandings, it was clear how strong connections had been forged. At the end of the program, the women were embracing each other in tearful goodbyes.

Most importantly, the documentary managed to capture the small ways in which extreme poverty can begin to change. As Rafea navigated the numerous setbacks her husband set in front of her, from disrupting her training and asking her to return home, to preventing her from establishing a training center for other women – it was Rafea’s determination that held out the promise for change. Rafea: Solar Mama is one of eight films commissioned as part of the Why Poverty? Series, which seeks to spur the debate about the complexity of poverty issues.

In the Q&A session afterwards, Eldaeif recounted how the film had been screened in Jordan to a sold-out theatre filled with women in similar constrictive situations. They approached Rafea in droves to tell her how inspired they were by her story. The inspiration is felt particularly in the final moments of the film, when Rafea’s brother visits to see the solar powered light fixture she has assembled in her home. When he turns on the light he recites a local proverb that loosely translates to, “The one that works hard brings the light.”