The Sourlands is a region in central New Jersey surrounding the Sourland Mountains. The land contains the largest stretch of unbroken land in the state, many farms, forests and sustainable energy researchers and start-ups. The movie, Sourlands, takes a close look at each of these communities and their role in the economic future of the area, and preservation of the land.

Sourlands begins with a look at the independent farmers of the region, including Sweet Sourland Farms, Chickadee Creek Farm and Stonehenge Farms. In voice over, filmmaker Jared Flesher points out several hardships the farming community in New Jersey faces: high property taxes, climate, cost of farmland and lack of a next generation of farmers. Enter Aubrey Yarbrough, a young farmer determined at the beginning of the film to not be a cliche farmer and talk about the weather. However, as the segment on farming progresses, the audience learns how climate change in the form of severe drought, powerful storms, and record rainfall, plays a central role in determining the success of a farmer’s crop. 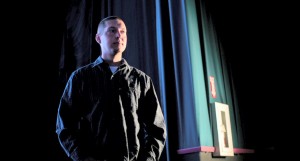 The next segment of the documentary looks at the forest, and deforestation issues plaguing the Americas. Every year, migrating birds from South America, Central America and the Caribbean, stop in the Sourlands’ forests to seek shelter and food. New Jersey, the movie tells us, is “losing the forest to Bambi”. Bambi, of course, is a white-tailed deer, a species in over abundance in New Jersey. Deer naturally eat the understory of a forest, destroying generations of regrowth essential to reforestation. Along with deer clearing the understory, New Jersey forests are negatively impacted by invasive species, or as Sourlands shows us, the deer resistant plants homeowners use in landscaping that regenerate in nearby forests. These deer resistant plants provide no natural food source for migrating birds that depend on the 17 miles of unbroken land in the Sourland Mountains, and the overgrowth of these invasive species further hampers the chances of the natural understory to grow back. Natural predators alone cannot control the white-tailed deer population, and Sourlands introduces us to a young deer hunter who explains that though there is a strong hunting community in New Jersey, hunters tend to go for the buck, the big prize, which does not effectively manage deer populations.

The third segment of Sourlands tackles the subject of energy and spotlights two sustainable energy projects, Mike Strizki’s Hydrogen House  and Savraj Singh’s Wattvision. The Hydrogen House demonstrates that living without a carbon footprint is a viable solution, and Wattvision, a home energy use monitoring system, provides the viewer the roadmap to that solution. The fourth segment of the documentary addresses the future, which the film tells us is uncertain but hopeful.

During a question and answer session at the end of the screening, Flesher states his reason for creating and sharing the film, an optimistic belief that, “people will protect the things they know and care about.” Hear more from the Q&A session here.