Sasha Ruether, director of Brothers on the Line has created a stunning and compelling documentary.

Brothers on the Line tells the story of the Reuther brothers, Walter, Vincent and Roy. Sons of a German immigrant who was brought up in Germany under a socialist democracy, the brothers adopted the political ideology of their father. Growing up in Detroit, they would become leaders in the fight for workers’ rights in the auto manufacturing plants in and around the Detroit and Flint Michigan area.

Led by their charismatic older brother Walter, they were instrumental in forming the United Auto Workers Union which opposed the corporate ownership and was successful in organizing work stoppages that led to negotiations with factory owners resulting in higher wages and better working conditions for factory workers. 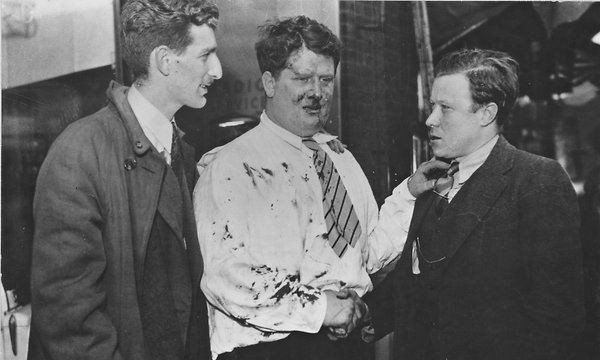 Workers coming out of the Great Depression, were exposed to unsafe and extremely oppressive conditions in manufacturing plants, with little compensation and virtually no benefits. The Ruether brothers were able to organize shop workers in opposing factory owners who were attempting to maintain the status quo in their manufacturing plants as well as their profits, which were threatened by workers who were denied a living wage.The brothers were successful in gaining better wages and working conditions at General Motors and other plants that supported the auto industry as well as the Ford Motor plant in Michigan.

In attempt to maintain the hold on the manufacturing plants the owners resorted to hiring criminals who would threaten and beat workers who engaged in sit down strike or activism of any kind. Sasha documents the story of the workers struggle through still photographs, interviews and archival footage, from as early as the 1930s.

The brothers activism was confronted with continued violence, even resulting in assassination attempts on Walter and Sasha’s grandfather Vincent, who lost his right eye as a result of a shotgun blast to the face. Undeterred by the violence the brothers continued to fight for workers’ rights and the UAW grew to be the largest union in the United States. The UAWs large membership gained huge political clout in national elections, usually aligning themselves with primarily Democratic candidates.

Their support often swayed elections to their candidate of choice. In the 1960 election they were instrumental in electing John F. Kennedy to the White House. Later Martin Luther King looked to Walter Ruether for help in organizing the fight for civil rights. The Ruethers joined the fight for equal rights for African Americans and were in no small part partly responsible for the passage of the Civil Rights Act under Lyndon Johnson. The Ruether Brothers, changed for the better, conditions of workers in the United States and the world. Their concern for the worker led to positive changes which we take for granted in today’s society. Health Care, Medicaid, Medicare, a 40 hour work week, safer working conditions, and pension plans, are all a direct result of work done by the Ruether Brothers.

This film illuminates a chapter in the history of the labor movement not well documented in American History. With the wide gap in income in America today, Brothers on the Line is as relevant now as it was in the 1930s. It illustrates what a group of well organized people can do to create social change when they are willing to put it all on the line.

After the screening, attorney Jim Johnson who has also served as Under Secretary of Treasury Enforcement during the Clinton administration led a Q&A session with filmmaker Sasha Ruether. Sasha is a producer/director of reality TV, commercials, music videos, and promotional films and the grandson of one of the brothers, Victor Ruether. Brothers on the Line is his first documentary feature.

There were a few descendants of the Ruether family in attendance, as well as many members of the UAW and the former Mayor of Montclair and current Council Member at Large, Bob Russo, who also teaches labor history at MSU. The discussion centered around the film’s relevance today and organization for economic equality. There was also some talk about socialism vs.capitalism and the technical aspects of making the film, such as using stills and archival footage.