If the title character of Frank would have seen the sold-out crowd gathered at the Montclair Film Festival’s screening Friday evening, he may have been elated. Or perhaps Frank would take a moment to have a breakdown. With Frank or Frank, you can never tell what to expect. 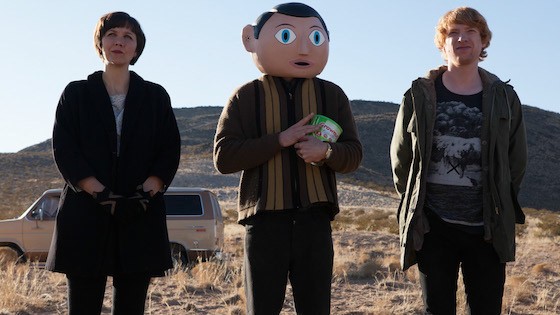 The romp of a film follows the adventures of a band named, “Soronprfbs” (don’t ask the band to pronounce it) as they try to record an album in a remote Irish village, and then journey all the way to the South by Southwest (SXSW) festival in Austin, Texas. Wearing a large papier-mâché mask throughout most of the film, Michael Fassbender stars as Frank, the bizarre front man of the band.

As the character of Jon (Domnhall Gleeson), the band’s keyboardist and occasional narrator of sorts says, “What goes on in that head inside that head?” Frank never removes his mask, eating and showering with it on all the time. Yet he is fully at home in a band that also features an aggressive Theremin-player Clara (Maggie Gyllenhaal), a passive-aggressive guitarist (François Civil), a barely verbal keyboardist (Carla Azar), and a depressive manager who has an odd romantic obsession with mannequins, Don (Scoot McNairy).

The screening at the Festival was the New Jersey premiere of this film, which has screened at numerous festivals around the world and already been released in the UK. Although Frank’s character will be new to most Americans, he was likely much more recognizable to audiences in the United Kingdom.

The character is based upon Frank Sidebottom, a persona developed by English musician and comedian Chris Sievey for his performances. Wearing a large cartoon-style mask, he sang in a number of short-lived bands. Sievey would often continue to wear the mask for hours even when not performing, and his band mates spoke of his switching between his Chris and Frank selves. Sievey-as-Sidebottom gained a cult following and his fame later spread to television, including a show, Frank Sidebottom’s Proper Telly Show.

Jon Ronson, who was a member of the Oh Blimey Band with Sievey in the 1980s, described his experiences in an article for The Guardian. Along with co-writer Peter Straughan, he used the Chris Sievey/Frank Sidebottom story as inspiration for the fictionalized version in the film. After completing his work on the film, he wrote Frank: The True Story that Inspired the Movie.

In the words of Ronson’s book, the spirit of the film celebrates the often “too wonderfully strange” personalities that sit on the fringes of the entertainment industry. Although the band has its share of problems, the rag-tag group finds support and inspiration in each other. Certainly the MFF audience seemed to find the same in them. As the credits went up, the Festival-goers were reluctant to get out of their seats, hoping maybe they might catch another glimpse of that unpronounceable band, Soronprfbs.