“You need to think about yourself first and other people’s bikes second.”

This line, spoken by Harper (played by Bridey Elliott) to her roommate and best friend, Allie (played by Clare McNulty), as they abandon a bicycle borrowed from a neighbor on their way to the beach, perfectly encapsulates the self-centered worldview of the protagonists in Fort Tilden, which was enthusiastically received by a sold-out crowd at the Montclair Film Festival on Friday night. 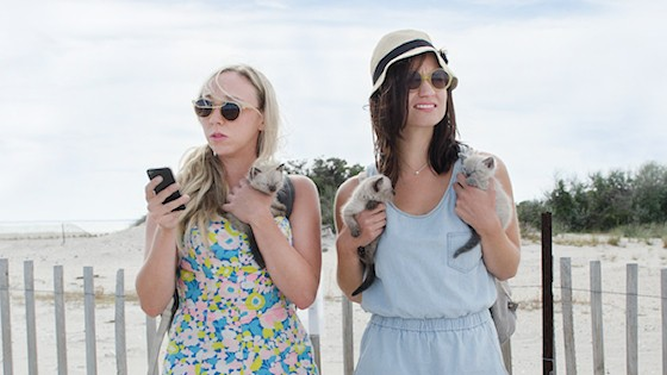 Winner of the Grand Jury Prize at the 2014 SXSW Film Festival, Fort Tilden is an ascerbic comedy about two aimless young women in their mid-twenties who spend a day trying to get to the beach. Harper is an aspiring (read unemployed) artist with an indulgent and distant (both literally and metaphorically) father who serves as her personal bank.  Allie intends to join the Peace Corps in Liberia after deciding that working for a start-up wasn’t all that it’s cracked up to be.

After meeting two young men at a party, the two friends decide to join them at the beach at Fort Tilden the following day. What should be a relatively simple excursion through the streets of Brooklyn disintegrates into an increasingly frustrating trip full of self-inflicted mishaps. Their misadventures expose the true nature of their personalities and the fissures in their relationship.

Harper and Allie don’t have youthful exuberance. They’re entitled, jaded, selfish and vacuous. But they’re also very funny and relatable–essentially caricatures of their millennial generation. Reminiscent of Girls and Ferris Bueller’s Day Off, Fort Tilden offers up a series of vignettes that feel simultaneously outrageous and true-to-life, and become increasingly more cringe-worthy as the friends finally make it to their rendezvous at Fort Tilden.

Post-screening, Sarah-Violet Bliss and Charles Rogers, Fort Tilden’s co-writers/directors, and Bridey Elliott, the actress who plays Harper, discussed the film with Eric Johnson, MMF’s comedy programmer, and answered a few questions from the audience. Charles, describing Fort Tilden as a “sympathetic satire,” said he and Sarah-Violet wanted to “examine the things that are uncomfortable about our generation.…we’re hoping the film [captures] some of the sharper edges of what is actually happening out there in real life.”

Bridey, describing Harper and Allie, said that “everyone knows these people. I’ve been in different friendships where I was the Allie and in others where I was the Harper.” She infused the role of Harper with some elements from those past experiences.

When asked how much of the movie is based on personal experience, Sarah-Violet responded that the movie consists of some “’best hits” of a lot of our friends and ourselves. [The characters] are embellishments of all of us.”

During a brief conversation with Eric after the screening, he mentioned that the first time he saw the film he was struck by the fact that it doesn’t have a traditional narrative arc. There’s no tidy ending. Harper and Allie don’t evolve during the course of the movie and there is no ‘redemption’ for them. Despite everything that befalls them during the course of a single day, they are as unapologetic and full of disdain at the end of the movie as they are when the audience first meets them. And at least to this viewer’s mind, that is precisely what makes Fort Tilden such a subversive pleasure to watch.