“There’s only one star,” John Wojtowicz announces during The Dog, his engrossing bio-doc produced and directed by the team of Allison Berg and Francois Keraudren, which played last night at the Clairidge, “and its me!” He spends the rest of the film trying to convince the audience his case is not without merit. 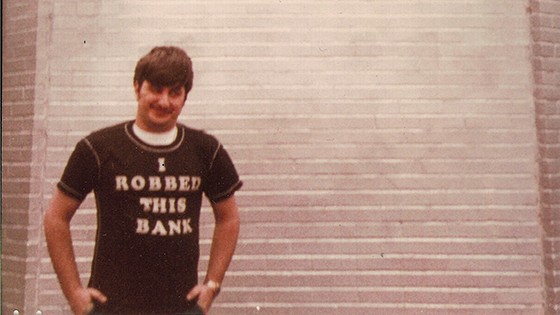 Wojtowicz was the real-life inspiration for Sidney Lumet’s 1975 classic, Dog Day Afternoon. That story, of Wojtowicz’s attempt and failure to rob a bank in Brooklyn in 1972 in order to pay for his gay lover’s sex change operation, is a thoroughly compelling one of the love and notoriety surrounding the celebrity of crime. These seem to be the two most important themes in Wojtowicz’s life, and his twin afflictions. His trouble is that of many a one-hit wonder: what’s to be done when your 15 minutes have come and gone? Wojtowicz went the route of clinging to the image of himself as dictated by media accounts and gobbled up by many subsequent audiences. Hence his moniker, The Dog.

His other major motif was that of love, and it pops up in the film in the form of the great loves of his life. Early on he establishes his claim that you can love more than one person at a time, but the silent codicil seems to be none too well. All those who loved him at some point–whether his mother, his wife and the mother of his children, or his various lovers–seem to have lost as much as they gained in their relationships.

Though I’m sure he would say all of this was beside the point. Wojtowicz comes off as uncommonly good-hearted, if naïve and arrogant, in his yearning for the love of others. To Wojtowicz, anything was reasonable in order to attain it, and everything else was mere details.

All of this is a credit to the filmmakers of this well-researched and complex film, who were greeted with a strong turnout for a Q&A rife with personal anecdotes about their subject during the decade-long process it took to bring the film to the screen. Berg recounted the many tests Wojtowicz put the filmmakers through in order to gain entry to his inner circle, and yet how he brought a bag of naked photos of past lovers to their very first meeting. One of the more illustrative stories was of his compulsive archiving of his own life long before the robbery, as if he believed without doubt that all his quotidian moments would one day be meaningful.