I Am Eleven, directed by Australian filmmaker Genevieve Bailey allows us to join her on her six year journey around the world interviewing eleven year-olds. In her own words she narrates her reasons for making the film and choosing the age eleven. She explains she was in a very low period in her life, and wanted to make an upbeat film about an age that was her own personal favorite. It has been a long time since I have been in a movie theater with a group of pre-teen boys and girls and it’s not a bad way to spend a spring Saturday afternoon. The din of young voices reminded me of my own pre-adolescent days. 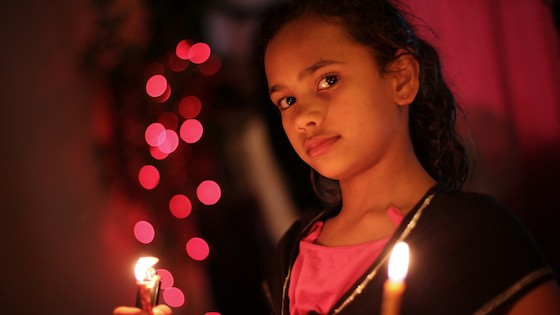 Ms. Bailey fluctuates back and forth between her eleven year-olds. They reside in The United Kingdom, Asia, Thailand, Western and Eastern Europe, The United States and India. The diversity of their family make-up and economic backgrounds almost seem to have no barriers. Her camera shows her eleven year-olds smiling and giddy with joy in an orphanage in India. That childhood innocence appears no different from what their counterparts living in nuclear families were experiencing.

That quality of innocence is one of the biggest points of the film. These eleven year-olds are in the last phase of childhood. They are on the cusp of puberty and young adulthood. There is almost a foreboding in their words, as they are keenly aware of the oncoming passage of time, and where this will ultimately lead them.

The eleven year-olds are all poised and ready to enter their teens and twenties. Just as every generation before them has done. We can rest easy. The world we have bought them into is not as daunting as we perceive.

Ms. Bailey was fortunate enough to catch up with some of her eleven year-olds several years later. They were in their mid-teens. As one acknowledged there is really no returning to the state of being eleven, “You have to be more cautious now, ” she says. As an adult long past eleven sitting in the audience, I can’t help getting a bit choked up with emotion, as I nod my head in agreement.