A Life Outside, director Catherine Brabec’s beautifully lensed doc chronicles the five decades a group of boyhood friends spend dedicating their lives to surfing the Jersey shore. A Life Outside is part buddy pic, part eco-activist warning, and in large part, a history of the sport itself from the sleepy indulgence of drop-outs at society’s fringe, to a multi-billion dollar generating sport today. 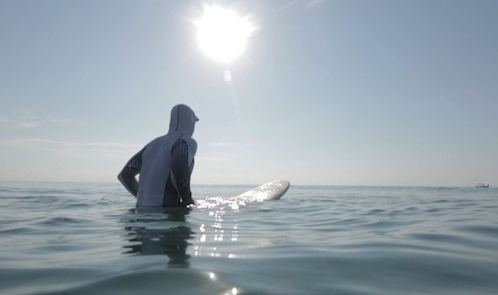 The love the men have for the sport and each other is quite palpable, and this drives the picture. Bookended by the devastation of Hurricane Sandy, the story starts in sleepy Seaside Heights of the 1950s, the furthest thing from a surf community anyone could imagine then or now. But, like the sport, the men’s lives were insular and deeply interwoven with the ocean. This begat the conditions and opportunity for the boys to become obsessed with surfing, then dovetailing with the sport’s national rise. In the beginning, it was necessary for one of the boys to personally know someone who had a surfboard, in order to generate the opportunity to borrow a board or the enthusiasm in one’s parent’s to help them buy their own. By the end, the boys, grown into middle-aged men, are part of an international community of millions.

The heart of the picture is the dichotomy of the Jersey Shore as a premier surf venue created by these friends, specifically the break around Casino Pier in Seaside. The destruction of the pier during Sandy alters the environment and history of the place but not the camaraderie of the men. The reverence other surfers of West Coast or Hawaiian ilk have for their Eastern brethren, having nothing of their status or weather, is charming and played well with the hometown crowd.

Catherine Brabec took questions after but deflected much of the attention to her subjects, and the men came off as well in person as on the screen; their hearts is the collective heart of the movie. Brabec mentioned that the genesis of the work lay in meeting her subjects as voluble teachers as a burgeoning surfer herself. This Kickstarter funded project is the happy result, a pupil’s gift to her legendary instructors.