May 3rd, a perfect spring day for strolling along the town of Montclair and partaking in all the activities it has to offer, like getting a good deal at a thrift sale, or filling-up on free samples of ice cream or olive oil, even catching a trolley! Yes, a trolley! For May 3rd is not just a glorious day to enjoy budding tulips and petunias, but also to see blooming artists at the Montclair Film Festival. I had the 90-minute pleasure of seeing Kidz Shortz, An MFF short film competition for young people. 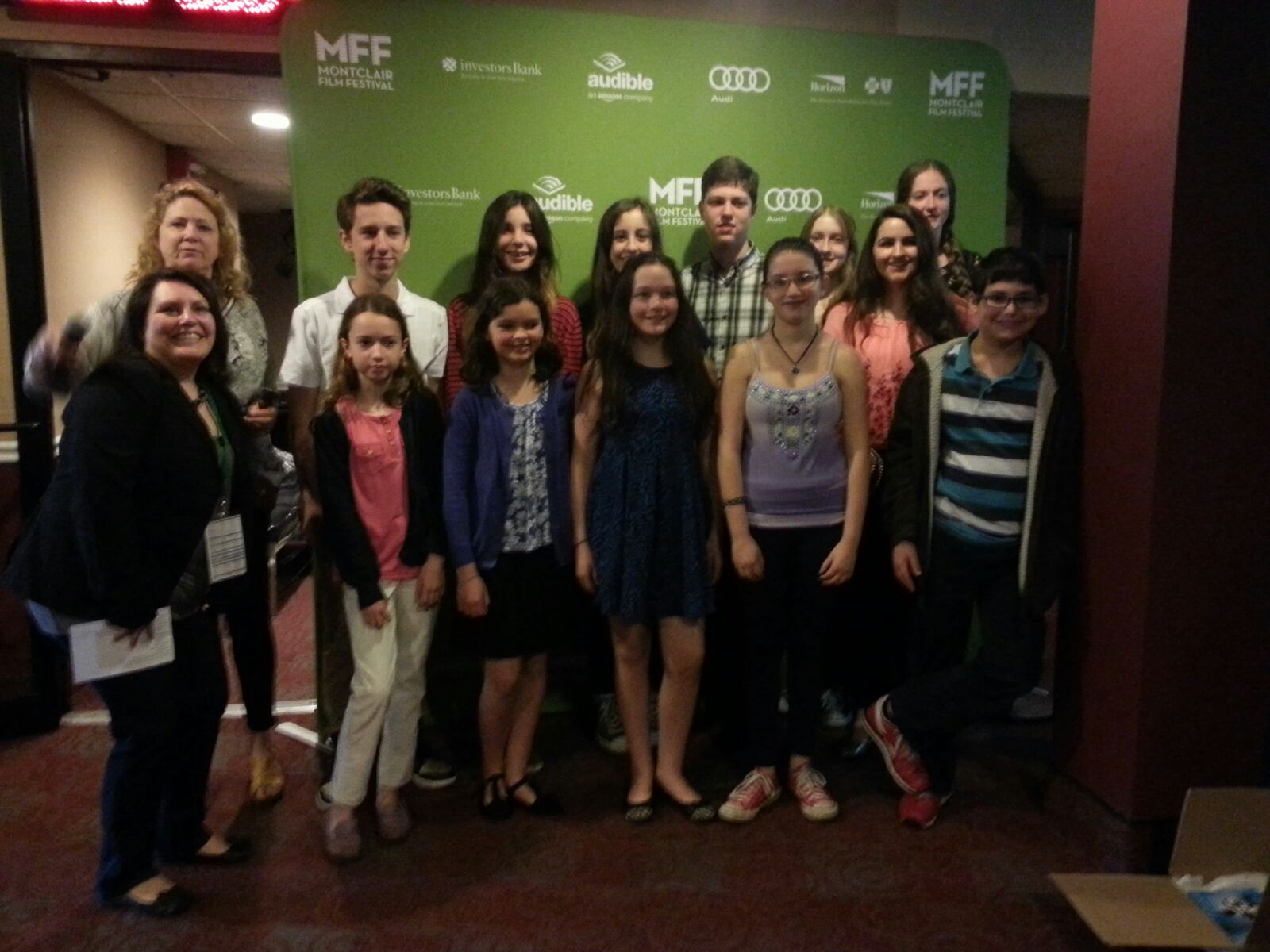 The viewing started with, “A Day in the Life of 2045,” where a young boy was being taunted by his pesky digital human alarm clock because he [the boy] did not brush his teeth as soon as he woke up. The audience got to witness “Pill Fusers” which turned breakfast into a pill instantly, Telekinesis, and of course, those digital humans. Ultimately, the alarm clock had to be reminded that teeth-brushing is for after breakfast, and with the digital human kept at bay, the boy was peacefully able to teleport to his friend’s house. The laughter of the audience, however, continued as the credits rolled.

Next came, “Spot Says,” a funny little claymation about a girl who invents a collar that allows her dog to speak, but does that dog chatter-on! The girl is constantly embarrassed and humiliated by the secrets that her pet spills unknowingly, and therefore has no choice but to throw away the collar.

On the note of non-live-action films, “A Trip to the Woods,” was shown. This adorable stop-motion, accompanied by French music, tells the tale of a little animal family who decides to take a trip to the woods to go camping. Suddenly, as the little family is sleeping, lights come from the sky and who appears but aliens! But just as the audience thinks the family is doomed, the two families dance together until it is time for the aliens to head back to their planet.

The audience saw “The Playdate” next. A film about two girls who are hanging out together, but really aren’t hanging out–all they do is communicate “via” iPhones! This film demonstrates the growing problem in society today about how kids are seemingly unable to communicate in real social settings and seem only capable of texting or communicating online.

The mood quickly changed from happiness to sorrow when a giant tsunami hit New York City, wiping out the majority of its inhabitants, leaving small groups of humans needing to scavenge for food in “Drowned in Tears.” Here we see a girl and her father battling to not just stay alive, but arguing over the dangers of how the world is now, and how fragile life is.

But, the mood picked up again in “Dreams Do Come True” with the background music being “Story of my Life” by One Direction. This music video shows a girl daydreaming, and a sudden flash-forward of her having fun with her friends and enjoying the world around her. The film then rewinds leaving her once again alone in her room. But the doorbell rings and we know she does not have to daydream of having a happy day any longer, she smiles and “cut to black.”

“Holding Hands” is also a film that places much importance on its song which is, “Glowing” by D.A. Both the film and the song’s music video represent the importance of taking care of our present to better our future. “Holding Hands” focuses mostly on global warming, as it cuts between news clips, and how the world looks “now” (the film takes place in the future), and how a boy and a girl are still holding hands, even though they are now rummaging through the ruins of our time (2014). The world seems inhabitable, as the two are wearing gas masks.

Eventually, the couples makes it to the ocean, which makes the audience think, is there hope for us yet?

Next, we see, “Futuristic Education,” where a girl really dislikes going to school, and so, we have the future of education, where all we have to do is open our laptop and be taught, as our clones do all of the housework for us. Thankfully, it is only a dream, and the girl learns to appreciate life as it is.

Another film taking place in school is “The Montclair Project,” which just happens to be a real project. Three students are sitting in the classroom trying to figure out what they will make a film about. Will the film be about a future where laughing is illegal? Nah. How about a film where there is only one man left on Earth? Nope! Maybe a film about how humans are destroying the planet and how the we need to take care of it? Definitely not!

Afterwards, we see a documentary that has two girls speaking about technology now, and how they think it will be in the future. The girls discuss how social standards are changing, as well as, how technology effects the economy. The girls enlighten us on why some people think they need technology so much.

The next film opens with Dr. Martin Luther King Jr. making his “I Have a Dream” speech. We then see some students with triangles on their hands, while others have squares, all while flashes of news broadcasts of segregation appear. Finally, one student wears a triangle and a square on his hand which shows us that it is okay to stand up for our beliefs, and that we all should be able to get along and stop separating ourselves from one another.

“Greener Grass” is screened afterwards, and we see a young man alone in the woods who is seemingly being chased by something. The editing is superb as we see flashes of his life with his girlfriend in what appear to be happier days, and hear a combination of growls and dub-step.

The young man is wearing a uniform, almost like an astronaut, which allows the audience to believe that the world is toxic, finally we see a flash of graffiti on an abandoned shed, “And nature prevailed.”

“Broke and Famous” a film written by the same person, is much different than the previous film, as it is literally, more upbeat. It tells the story of a young man who does not have enough money to buy himself a drum set, so he makes one out of cardboard. Suddenly, he becomes an internet sensation, and when one jealous drummer throws out his real drum set and steals the cardboard set, the internet sensation thinks all is lost–until he finds the real drum set in the dumpster.

Our 14th film is called “One Sunday,” and it is the cool combination of indie and experimental. We are faced with one crying girl, as make-up cascades down her cheek. We see her going out with a satchel, digging up something and putting it into a mason jar. We then see another girl doing something similar with the mason jar. Ultimately we find out that these girls are some kind of saviors, collecting tears of neglected children, and water of unwanted persons.

Last but not least, we have another film that takes place around a school. There is the typical girl/boy glaring from across the room and whispering, with the very fitting song accompaniment, Taylor Swift’s “Love Story.” And there is also the jealousy of one young man who hates the thought of one happy couple, but is it the boyfriend or the girlfriend that he has his eye on?

After the films we had a brief question and answer period that discussed how the films were made, some being shot on the webcam of an iPad, while other films used digital cameras. We also asked the filmmakers what they learned from their films, and that scripts usually come in handy, editing is very important to master because it could change the whole film, and also, musical choices are great for keeping the audience entertained and greatly effect the mood and tone of a piece.

What I learned? That participating in the Montclair Film Festival was a wonderful experience for all. Kidz Shortz was certainly not something to underestimate, as the films were very enjoyable and well done. Films have so much power. They can prove a message or point, they can make us change our ways and our minds, and they can also bring us all together, proud parents, filmmakers, audiences, and bloggers alike.

Click here to view all the wonderful KIdz Shortz films.