The weather couldn’t have been worse, rain pummeling the streets with a heavy, chilly downpour, still, the die-hards came out to the Bellevue Theater to view comedian Jordan Brady’s film, I Am Road Comic. He made it on the tails of his 2010 documentary, I Am Comic, a compilation of more than eighty interviews of professional comedians discussing the art and business of stand-up comedy. 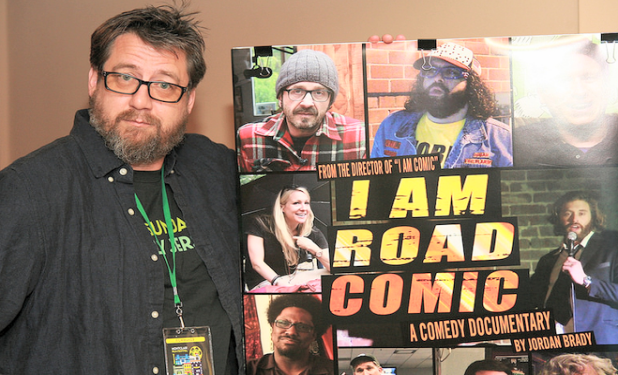 This time around, Brady hit the road with his multi-talented sidekick: comedian, actor, author, and comedy writer Wayne Federman. A few of Federman’s many credits include supporting acting roles on Curb Your Enthusiasm, The X-Files, Legally Blonde, The 40-Year-Old Virgin, and head monologue writer for Late Night with Jimmy Fallon in its first season.

The duo accepted a weekend gig that proved to be an opportunity to get back on the road scene when they were almost mistakenly booked to co-headline at Jack Didley’s in Kennewick, WA. That venue is notorious for an unfortunate incident that happened a couple weeks before they were scheduled there: a customer landed in the hospital with a coma after being thrown out of the club by its bouncers, hitting his head on the hard ground. Brady and Federman were put up at the Clover Island Inn, where Federman was put off by a brown, wet drip that trickled onto his bed.

The somewhat dicey booking gave Brady a chance to assess the current climate for road comedians hawking their wares, a gypsy-like existence. One wonders how they do it. The pay is paltry, the accommodations stink, and if the venues give them a meal, especially a normal meal, they’re lucky. We see them getting “free breakfast and free lunch” by stuffing goodies from the continental breakfasts into their carry cases, and they seem happy about that. Of course, they don’t really need to be that frugal, but they’re being real “road comics” on this weekend adventure. 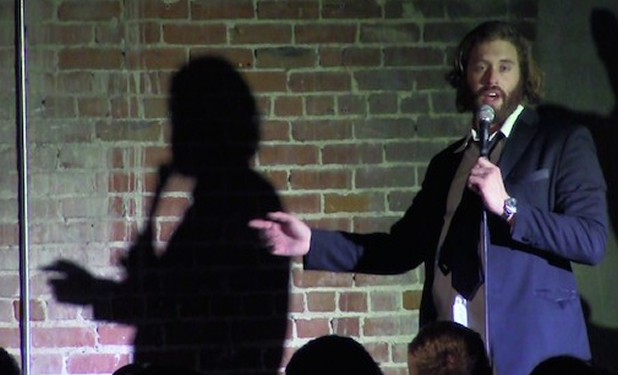 Comedian TJ Miller from I Am Road Comic

If we are not overly familiar with the terms “headliner” and “middleman,” we get familiar with them listening to the comedians who are interviewed by Brady. It’s better to be a “headliner” than the middle performer but the comics are glad to get a chance to perform either way. They candidly express their frustrations about how hard it is to become known without sufficient media coverage these days. The benefit of moving around the country to perform the way they do is that it gives them a chance to test out their material, despite the hardships of the journey. It’s an indisputable passion for them. 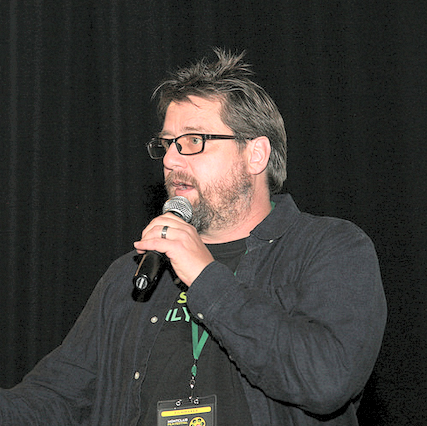 In the post-film chat conducted by MFF programmer, Eric Johnson, Brady was joined by Alysia Wood, one of the comics in his film. “Going on the road is nostalgic, still a throwback to vaudeville…there is a romance in it to suffering for your art,” says Brady. He reinforced what was said in the film, expresing the futility of competing for visibility if the presence of media exposure isn’t there. He complained that there are comics who become sensations because they swamp the internet with a five minute YouTube performance, while a comic who has struggled for years without internet coverage lags behind. The experience of going into “road” mode got him back in touch with comics and comedy clubs. “If being on the road was like it is today, I’d stay closer to home,” says Brady.

Brady directed and edited the film and shot it himself with his camcorder. Over two dozen comedians were in the film. Included on the list are Pete Holmes, T.J. Miller, Marc Maron, Maria Bamford, Doug Benson, Kyle Kinane, Judah Friedlander, Jim Norton, W. Kamau Bell, Nikki Glaser and Alonzo Bodden. For non-comedy buffs, I Am Road Comic provides an introduction to those performers.

Click here for more pics from the I Am Road Comic screening.