The crisis arm of the Human Rights Watch is a small subset of the organization charged with investigating the most severe war crimes around the world. These fiercely brave individuals insert themselves into precarious situations to conduct painstaking research on potential “crimes against humanity” through multiple interviews and crime scene investigations. Careful not to be confused with journalists, this Emergency Team compiles the information for the purpose of informing the international community with the hope that the world’s governments will enact equitable interventions.

E-Team, winner of the Sundance Cinematography Award, weaves in two of the  subgroup’s most recent missions in Libya and Syria with the teams’s inception during the Kosovo conflict in the nineties. The cameras follow four members of the team in their homes, in meetings and in the trenches of their assignments in this unfettered look at their work and how they balance it within their lives.

The documentary credits open up with Ole Solvang playing on a keyboard in the Parisian apartment he shares with his wife and co-investigator, Anna Neistat, and her son. Soon award winning directors, Katy Chevigny and Ross Kauffman, bring the audience to the moment when Ole and Anna initiate their investigations by smuggling themselves across an international border.  “Welcome to Syria,” Anna jokes. 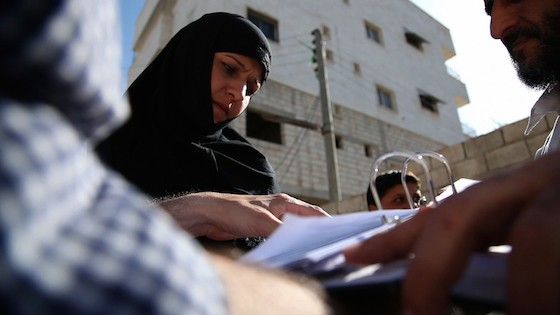 Through the couple’s trips surrounding the Syrian uprisings and the subsequent government forceful response, we see their conversations with torn families who have lost multiple members and the remains of murderous crime scenes. We witness them take cover with locals during an attack and their perseverance to continue to document the tragedies and push for action. Anna and Ole want to answer the plea of a man standing in the rubble of his razed neighborhood who beseeches them, “How do we stop this?!”

Their colleagues, Fred Abrahms and Peter Bouckert, are chronicled during their own detective work in Libya in the chaotic aftermath from the fall of Gaddafi’s regime. The rebels trust the E-Team and understand their motives to scrutinize both sides of the conflict.  As one rebel admits, they may start as the victims, but the enemies in turn become their victims. Peter leads the inspection of weapons caches and in one place they find looted boxes labeled “Less Lethal Launcher”.  A little later on the film cuts to Fred and Peter inspecting a human slaughterhouse and the charred bodies on the floor. As shocking as each scene is, we know the unfortunate truth that this is not unique within human history.

Thus this team of international crime scene investigators was conceived of at the end of the twentieth century after Fred’s probe into a burning village in Kosovo. He found the village in flames and 9 or so people laying dead in a gully. The press release was picked up on the front page of the New York Times and it was supposedly the impetus for United States’ intervention.

It is these opportunities to change things that propel the E-Team to continue their arduous and perilous work. They each balance their fears and frustrations with a sense of purpose and what normalcy they maintain in their lives. Each person is realistic about what they can accomplish. After providing evidence of the seran attacks in Syria,  Anna explained “…the fact that we won’t see hopefully another chemical attack is a major breakthrough, but that does not really bring any relief to those people who continue to be killed by conventional weapons. You really go from hope, to despair, to hope, back to despair and then you meet somebody on the ground; a witness, a victim, an incredible activist and you feel that if they haven’t given up, how on Earth do you have the right to give up on them?”

As the audience, we are granted this incredible insight into the work and lives of these human rights activists thanks to the total access and creative control that Katy Chevigny and Ross Kauffman insisted upon in their film deal with Human Rights Watch. Chevigny was unable to attend the Montclair screening, but the unassuming and accomplished Mason Gross professor, Kauffman, was warmly received in the theater. He thanked the crowd and invited the present members of the film’s crew (the editor-D. Teague, assistant editor-J. Boyle and associate producer-S. Henney) to join him for the Q & A. 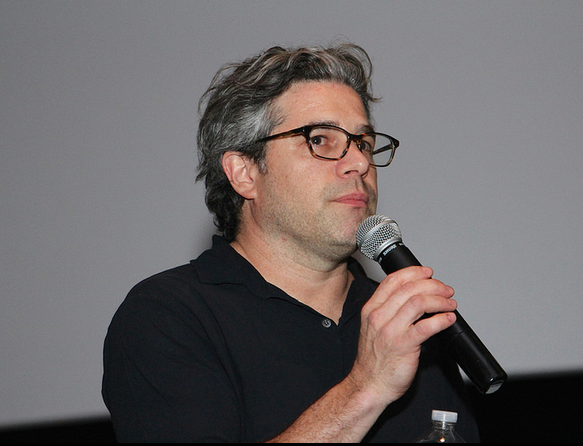 Kauffman spoke about the E-Team’s relationship to the victims; they often know that the team is committed to sharing their story to effect change.  With Ole as the lead, they were very meticulous in ensuring that all of the people shown in the film were safe from backlash prior to the screening.

Currently, with their trademark perseverance, the team are on assignments in the Ukraine, South Sudan and the Central African Republic. As for the Academy Award winning director, he has three or four more projects on the horizon, some of which may be a bit more lighthearted than E-Team, but likely works to be anticipated.

Click here to view more pics from the screening.