Exposed follows a group of burlesque performers in New York, showing us both their offstage lives and their onstage performances. Beth B, director of the film, met with 70 performers before choosing the group of eight that we were introduced to in the movie. While a very different group, they were driven by many of the same issues and the film does a good job at exploring what got them to where they were. 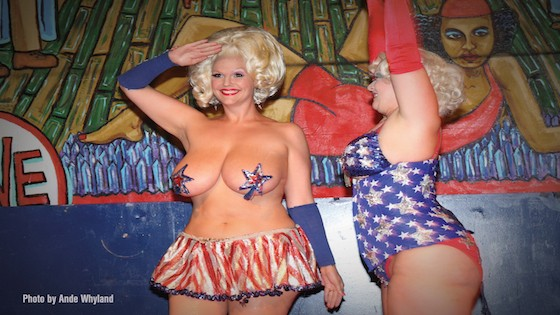 One of the more compelling stories is that of Mat Fraser, a disabled performer who says that he “always wanted to be accepted despite his disability and, in burlesque he is.” Mat is a thalidomide child, with short “flipper arms, ” who begins his act with false arms, before taking them off with a flourish you expect in burlesque. He talks about the social injustice of being bullied because of his injustice, upset that it’s not his fault that he is the way he is. He discovered that comedy and making people laugh, were a great way to make his political point.

Bunny Love, another performer, talks about the freedom in vulgarity. To her, it’s all about the control. “You’re standing naked and vulnerable in front of the audience and then you think, hey, I got this.”

Dirty Martini wanted to be a ballerina, but was told that her body was all wrong for it. She became a burlesque performer and now uses her performances to both entertain and make political statements to her audiences. Bambi the Mermaid tells the audience, “no matter how they look, everyone is afraid of something.”

Certainly, the hardest performer to watch, for me at any rate, was Rose Wood. A transgendered performer, he underwent breast construction surgery during the movie and talks very candidly about his struggles. He also performs the hardest scene to watch, Serial Killer, where he takes another performer who’s in the audience, puts her in a bathtub, pretends to kill her and skin her and then staples her “skin” to himself, becoming her. It was brutal for sure.

Mat talks about having people see his imperfections, yet still performing and being very public and hoping that the audience realizes that everyone is imperfect and that they don’t have to hold themselves back because of their imperfections. And this is the central theme of the film. All of these performers are open about their imperfections (as society would label them), to help other people with struggles of their own.

It’s an important message we should all heed.