On Sunday May 4th, moviegoers gathered at The Clairidge Theatre to view Montclair’s own David Gaynes’ documentary, Next Year Jerusalem. This unique film details the experience of “eight nursing home residents [that] are given one last great adventure, a trip to Israel.”

In all honesty, I had a pre-conceived notion that the film would focus on the handicaps of aging, or even the inevitable topic of death, but I was more than pleasantly surprised to find that the film emphasizes life, and the choice to seize opportunities at any age. The remarkable individuals that appear on screen represent everything that we as humans should strive to be: daring, adventurous, and truly alive. I must applaud the wonderful nursing home staff and crew that made this voyage possible. They have given this elderly group an invaluable experience and a new perspective with which they can view the world–not an easy task considering the bulk of these travelers were 80 plus. 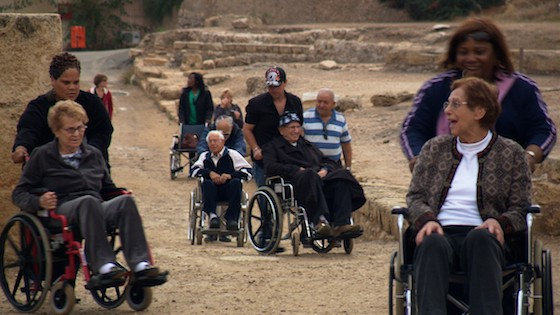 As the film ended, I had this incredible feeling of power and opportunity. After all, if these elderly folks could make the long trek to Israel, I can do anything, time is on my side.

The audience had the privilege of listening to a post-film Q&A with the director. Gaynes was articulate and demonstrated clear passion for both the project and the people that he has documented. When Gaynes was asked how he became involved with the nursing home, he revealed that he initially volunteered when he was 17 years old to give him an edge during the college application process. After his teenage days, Gaynes remained involved by shooting a series of short films for the nursing home. It is evident that he truly believes in the work that the nursing home does and his excitement adds to the value of the film.

If you missed this Sunday’s viewing and would like the opportunity to see this impressive film, it will be playing at Quad Cinemas in New York City for one week only–beginning May 16th. For more information on Next Year Jerusalem, please check out the film’s website at: http://nextyearjerusalemmovie.com/synopsis/.