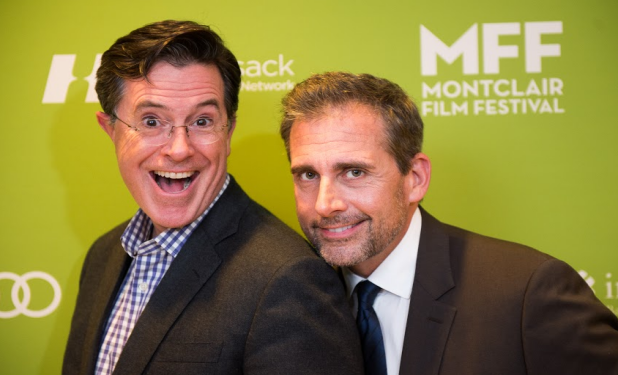 Stephen Colbert and Steve Carell delighted a packed house for almost two hours at the New Jersey Performing Arts Center (NJPAC) in Newark Friday night. This Montclair Film Festival “Conversation” was our fourth annual fundraising event with Stephen Colbert and will benefit next year’s Festival, which will run from May 1-10, 2015. 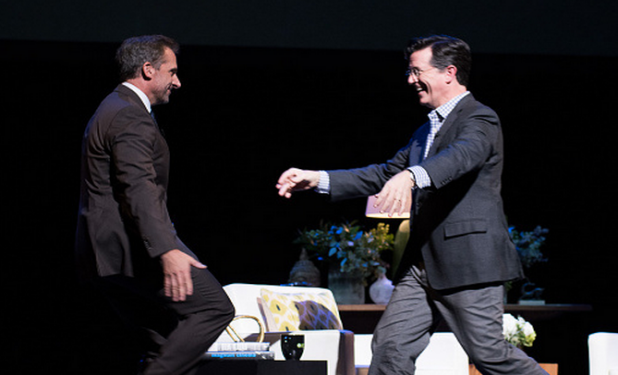 After a heartwarming introduction by Mr. Colbert, the two “Stevphens” reunited on stage and reminisced about their earliest days working at The Second City improv club in Chicago, to their stints on the short-lived Dana Carvey Show, to their memorable and riotous “Even Stevphen” debates on The Daily Show.

A major highlight of the evening was a screening of rarely seen clips spanning their extraordinary careers. Many audience members burst out laughing watching “Nauseated Waiters” and “The Ambiguously Gay Duo” skits from the Dana Carvey Show. But the biggest laughs came from the “Even Stepvhen” debates on The Daily Show. 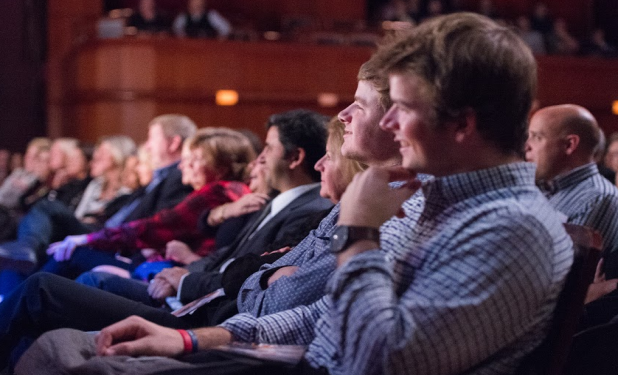 Mr. Colbert and Mr. Carell quipped that despite the short run of the Dana Carvey Show, it led them directly to their jobs on The Daily Show, where one of the show’s creators was a fan of their nauseated waiters skit. They both talked fondly of their time on the show and then recalled one particular interview they thought was a turning point in their roles as correspondents. 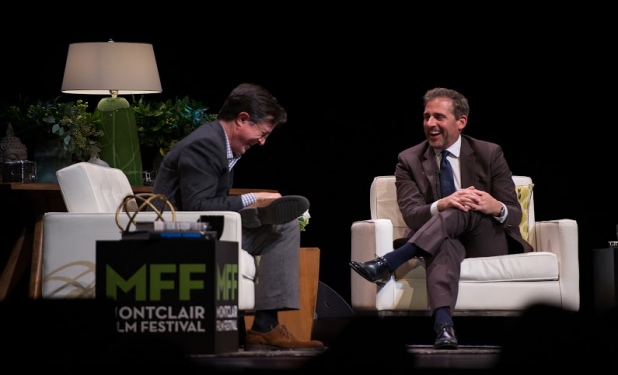 During John McCain’s 2000 presidential bid, Mr. Carell was interviewing him and questioned him on how he could be a warrior against pork barrel politics even though his committee approves more pork than any other committee in Congress. “He blanched” Carell recalls. “The whole interview hinged on that moment, that’s what we were hoping for, just to get a moment where he looked bewildered. I stared at him and then said, ‘I’m just kidding, I don’t know what I’m talking about.” “The Daily Show changed at that moment,” says Colbert. “Just keep being an idiot and you can ask the questions nobody else is asking.”

That conversation was followed by a brief Q&A in which one of the written audience requests was for the “Stevphens” to sing a song. So as not to disappoint, Mr. Colbert and Mr. Carell sang the Star Spangled Banner and when they were done, Mr.Colbert told the charmed crowd that “as a comedian this is why you end with the national anthem, you’re always guaranteed a standing ovation.”

Click here to view more great photos from this event!