What is the Jackrabbit? And why was it sent to two computer hackers to decipher? Those are only two of the underlying questions that need to be answered in this post-apocalyptic thriller that will grab your attention and hold it for the length of the film. Director Carleton Ranney weaves a gritty emotional story that makes you question ‘Is there anything better out there’ beyond the ‘Zone’? Are we better under the supervision of technology or without it? And what does loyalty really mean? 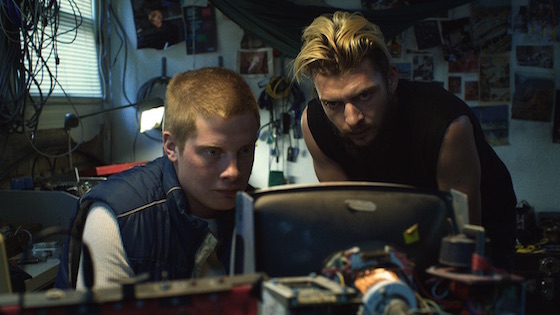 The centerpiece of this film is the gritty and strained relationship between two computer-hackers, Simon (Josh Caras) and Max (Ian Christopher Noel). This relationship really takes an emotional turn after Simon and Max meet a frontier nurse, Grace (Joslyn Jensen) in their pursuit of answers. A victim of societal depression, Grace apparently ends her life and it is clear that decisions have been made by both men. Does Simon go back to his comfortable, apparently high-paying job with VOPO (the Google of the time) or does he follow Max to find out what the government is hiding?

This is a ‘must see’ for any fan of the post-apocalypse genre–the emotional resonance of the characters and the social relevance makes you want to keep watching!

The interview below was collectively answered by Producers Joe Stankus, Destin Douglas and Rebecca Rose Perkins.

What was the biggest selling point with this film, there are so many in my opinion, but what did you see as the most beneficial when trying to ‘pitch’ this film?

With JACKRABBIT, our main intention was to create a very specific and believable world in City VI – one that was familiar and foreign at the same time. The whole team was really focused on getting the specific environment and tone right and, as a result, I think it’s one of the film’s strongest and most engaging features.  We didn’t have the budget or resources to get too flashy onscreen or show a lot of the stuff that one might expect from the sci-fi genre so instead we aimed to create a world where it felt like these more expensive ideas existed but just weren’t ever shown. It’s definitely a movie that asks the viewer to immerse themselves in the story world and experience it as one of the film’s characters would.

When budgeting a film of this nature, what is the biggest challenge?

I think on any movie of any scale you’re always gonna have to get creative with the budget and make certain concessions. On JACKRABBIT, we knew we wanted the movie to have a specific aesthetic that usually comes with a certain price tag – so it was a lot of maneuvering other elements of the production to keep costs low and manageable with a small crew. Some of this was just about using things like practical lights from hardware stores but it was mostly about creating a visual style that was achievable on our scale. Our DP, Ashley Connor had worked on a lot of super low-budget movies and knew how to get professional look out very little and our Production Designer, Will Crosby, did an amazing job creating this completely lived in world out of what was ostensibly junk.

The whole team spent a lot of time in pre-production reworking and altering the script in small ways so that it could be accomplished with the resources we had, and that kind of began informing the type of world we were creating. It was very important to us for the movie to never really seem like we didn’t have the means to pull something off. If we felt like something couldn’t be done well with the budget we had then we’d work with Carleton and try to rethink the scene or find a narratively justified way to approach it differently — which usually led to a more interesting, and unexpected, solution.

How did you go about finding the talent to craft this film? Were there any challenges? If so, what might they have been?

We were lucky to have a lot really talented and creative friends that were willing to go on this adventure with us. Carleton had been friends with our two leads, Josh and Ian, for years and he wrote the parts with them in mind. The bulk of the crew had either grown up together, gone to school together, or lived together at some point so it was a real tight-knit group. Carleton and Destin grew up in Austin, where we shot, and they spent a lot of time before the shoot casting local actors for all our supporting roles and finding folks who worked in the film industry down there to help fill in some of the other gaps. I will say one challenge we encountered was housing 12 people in a 4 bedroom guesthouse for 5 weeks — that was one experience I’m not super eager to repeat.

Carleton Ranney did a brilliant job in utilizing the resources at his disposal, did you have input into the direction that the film took? If so, what?

As with most films, this was a real team effort and everybody on the team wore several different hats throughout the production. Destin Douglas, co-wrote the script with Carleton, Rebecca Rose Perkins played a big role in the development process and served as basically our entire production office, and I was one of the film’s editors.  We all had a lot of faith in the story Carleton wanted to tell, and he was really open to our creative suggestions so that helped cultivate a really satisfying working environment and ultimately helped shape the film into something that I think is a little more unique and surprising than what could have come out of one mind alone.

The interview below is with Director Carleton Ranney.

What influences, if any, did you draw upon to create the surreal emotional feelings that the film invokes?

Early on in the process, even before I begin writing, I usually make a music playlist that informs my initial instincts on how I want the film to feel. I was listening to a lot of tracks by composer Glenn Branca and Tangerine Dream. I also had this book from an exhibit at Pompidou in Paris. The exhibit centered around the history of surveillance over the past 100 years; there were an abundant amount of surveillance images that inspired the film’s texture. There are also the film influences: Kieslowski’s Decalogue 1, Wargames, John Carpenter, but I would say the major influence on the film was my childhood. Every time I re-watch the film, I pick up on something from that period of my life that subconsciously seeped its way into the picture. I feel like that accounts for many of the surreal moments.

The sound design was genius, how important was this in creating the feelings and emotions for you as a filmmaker? And, what sort of impact did this design have on the set?

From day one of pre-production, we planned on creating a multilayered sound design the audience could viscerally feel throughout the viewing experience. So much of the City VI is experienced through a limited frame. The sound design was a great way to feel that world even though we are often confined from seeing it. The atmosphere of analog tech and abstract sound effects evokes a subjective claustrophobia that our main characters experience in City VI everyday. Most of this design was created in post-production by our wonderful sound designer, Colin Alexander. During production the actors really had to portray through performance reactions to these sounds. I feel they did such a wonderful job, considering there was no sound design for them to react to on set.

There seem to be a number of interwoven subplots in Jackrabbit that are never fully resolved, was this intentional? Did the cast have a hand in creating these plot dynamics?

Yes, the lack of resolution is completely intentional. Our characters live in a mirky world where information is controlled. I wanted the audience to subjectively feel what our characters experience as they navigate the mystery of the unknown. I would say to the cast and crew, its like your walking down the street and you happen upon a crime scene off in the distance. There is police tape holding you back. There are people standing around wanting to know what happened. You hear speculative chatter and see possible hints as to the events that took place. You begin to engage and create your own assumptions, even if you don’t have all the information. It is an innate human desire to know the full story, even if that means filling in the gaps.  It’s this sort of participatory scenario I wanted to create for an audience. Jackrabbit is like a puzzle and every frame is a piece of that puzzle.

The actors were aware of their particular character’s backstories, which helped them in their performances and how to play into the mystery of Jackrabbit.

The cast did a brilliant job of pulling emotion out of the audience (me), and creating involvement in their situation. How did you select Josh, Ian, and Joselyn for their roles?

Josh and Ian are my best friends. Jackrabbit was written for them and their particular strengths as actors. As for Joslyn, our producer/editor Joseph Stankus and cinematographer Ashley Connor worked on a film called “Funny Bunny” which she starred in. They brought her to my attention. We did an audition taping and she killed it.

I see Grace as a major turning point for Simon, and his decision whether or not to retreat to the safety of VOPO or to follow Max, do you see this as a metaphor for our society as a whole?

I feel that Simon’s choice, of whether or not to retreat to the safety of VOPO or follow Max, is representational of the choices most of us face everyday. In our society we often turn a blind eye to the morally questionable status quo, out of convenience. Simon’s dilemma is meant to challenge our audience to reflect on their own decisions, and how they participate in their society.

Click here for information on MFF screenings of Jackrabbit and to purchase tickets.