Education, it is an integral part of growing up. Whether a young adult is going to school just to learn, or is going to school to get into college so that he or she can get a better job, the question that Most Likely to Succeed is asking is “What are our children learning, and why are they learning it?” Are they learning material that will help them to pass a test so they can get into college, or are they learning material that will stick with them for the rest of their lives and help them to become better people in both a social and business setting? 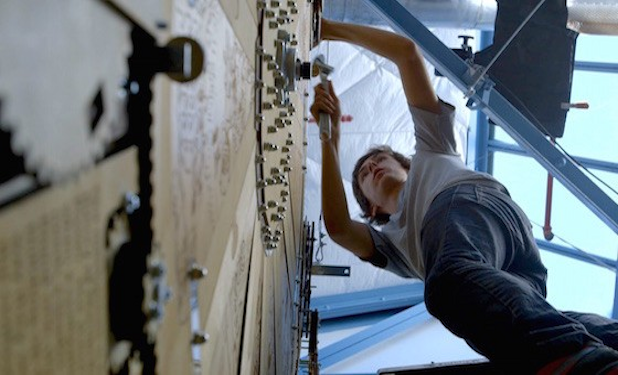 The audience arrived expecting to see a film based on just education–the packed house active in conversation up until the start of the film debating what were they about to see. By the film’s end, they were surprised, delighted, and shocked at the issues raised.

Most Likely to Succeed, written and directed by Greg Whiteley attempts to address very complex questions about our nation’s educational system. Should this important aspect of society be based on an over century old system that rigidly compartmentalizes learning, or should this system evolve with the needs of both the student and the modern business world?

Mr. Whitley and his crew visit a very special school, High Tech High, where learning is not oriented around the standardized tests and the old methods of thinking. Education is oriented around the students, teaching them the soft skills that they will need to make it in the ever changing world of business. High Tech High promotes the level of creativity and socialization that are needed to be successful now and in the future. Students do receive a certain level of English and math education, but not to the extent that our children get in an average high school environment.

Much of the film follows classes of students through their semester long preparation for the class final project on which they are not graded by their teachers, but by their peers and parents. This is a long and arduous process, that winds up building both character and confidence for a number of the students, and allows their parents to realize that their might just be another way for their students to get a better education. Producing a beautiful, artistic design based on the structure of ancient civilization, the students of the Physics/Philosophy class spent long hours creating complex, working mechanical structures to contribute to the social whole. While the Humanities class directed, produced and designed a play. With the genders separated, the boys play was based on a traditional Homeric Greek production. However the girls had a bit of a twist, they produced the same play, with an all-female production… based in modern day Pakistan. At the end of the semester all of the class projects/plays were displayed for parents and friends.

If we want our children to be able to both compete, and work together in the future, our educational system has to address these changes in a dynamic way that is not beholden to just the old ways of doing things. Most Likely to Succeed is not trying to tell us that Math, Science, and English are not important, they are! If our children are just going through the motions in order to pass a test, and are not actually interested in what is going on, then we have a problem.

Venture Capitalist and Collaborator Ted Dintersmith joined the audience to a round of applause after the screening and answered a few questions about the film, its inspiration, and what his hope is for its eventual future. All proceeds from the film will be funneled into the Future Project to benefit the youth of America. He also hopes to have the film widely distributed wherever possible, as soon as possible.

A question was raised regarding the effect of “soft skills” and the level of content that the children are receiving at schools like High Tech High. A lot of the information that we current learn in high school we never use, and rarely ever remember….so, are the kids really missing out?

During the closing scene of the film an interesting piece of text appeared on the screen. 98% of the students from High Tech High actually pass the SATs and do still get into college. This figure is a lot better than a great many public schools, and a lot of other charter schools–this really makes you think doesn’t it? And it’s supposed to.