A roomful of people, either involved in projects dealing with the issues of hunger and homelessness, or interested in being enlightened filled the Audible Listening Lounge for the Community Conversation on Hunger and Homelessness in Montclair.

The presentation was inspired by Montclair Film Festival’s screening of Time Out of Mind starring Richard Gere as a homeless man. It was a joint effort of the MFF and Partners for Health, a non-profit organization “with the mission to work collaboratively with the community,” said Partners for Health Executive Director, Pam Scott. 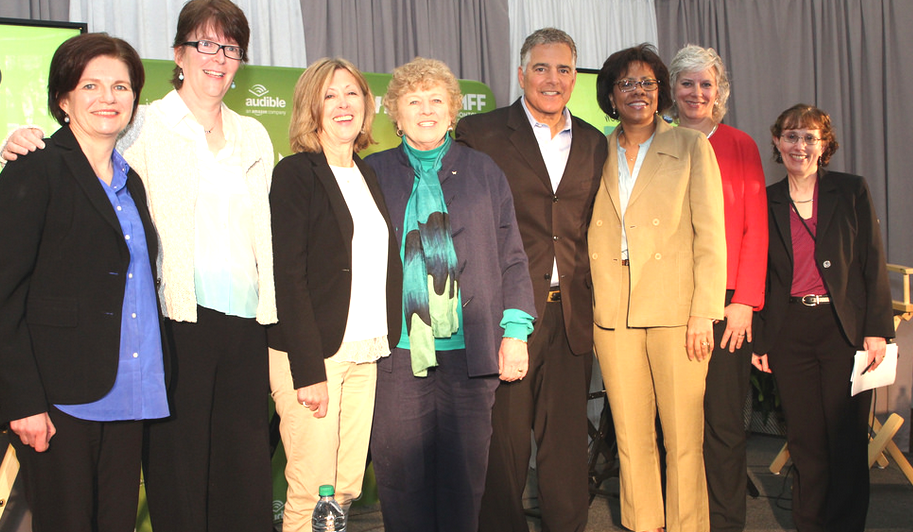 Steve Adubato, prominent New Jersey broadcaster, author and interviewer, and a dedicated friend to the MFF moderated the program. Adubato was, in his words, “playing the devil’s advocate” as he jabbed poised panel members with questions about the information they were sharing.

The discussion covered attitudes about homelessness, some meaningful statistics, and how the Montclair community can help. 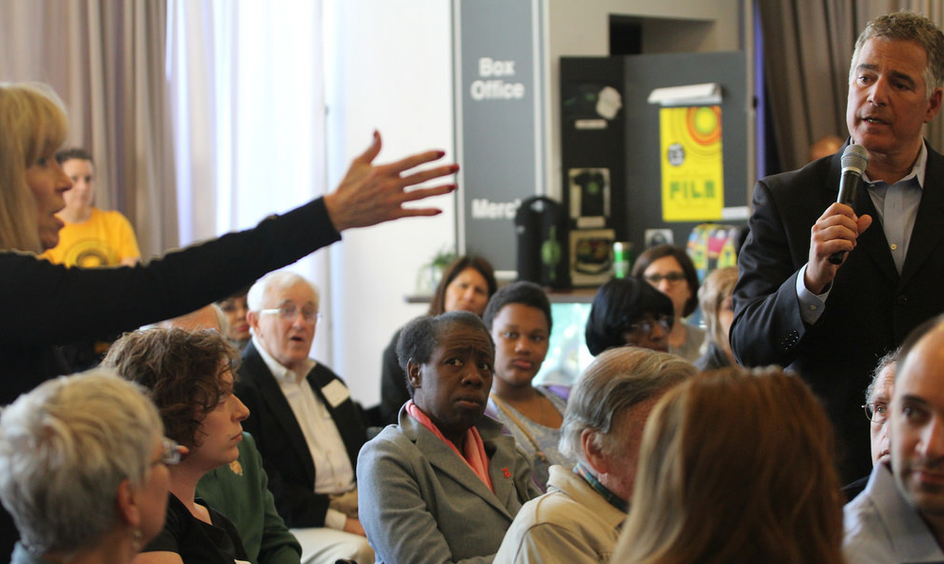 Regarding the impact of Richard Gere playing the role of a homeless man, Deb Ellis, Executive Director, New Jersey Coalition to End Homelessness, said, “I am really happy the movie is here because it helps to humanize it” (homelessness). She addressed the misconceptions that categorize a  homeless person as being a single mother, or a vet, or a substance abuser, stressing that it could happen to anyone. She added, “the solution now is a home instead of a treatment solution. It’s a housing project.” 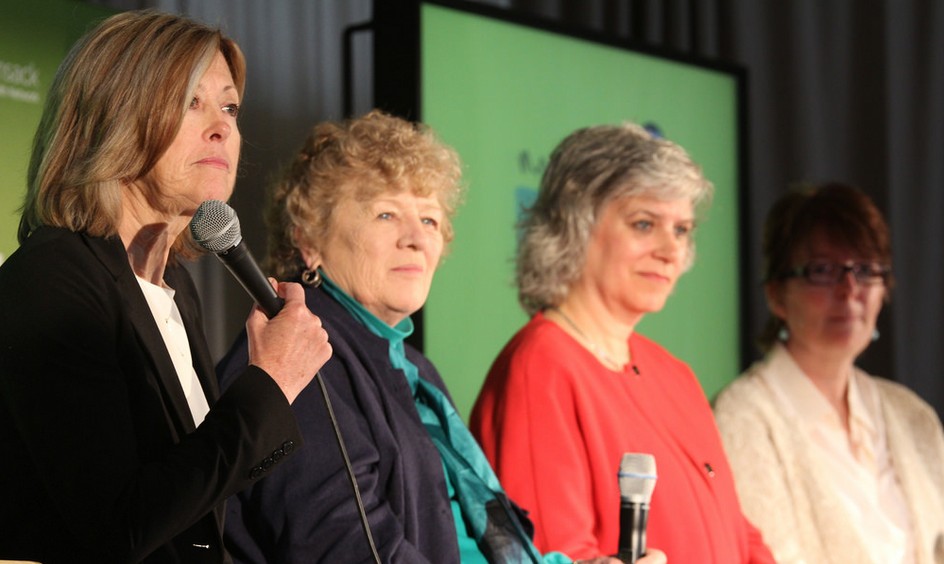 In Gere’s interview with Stephen Colbert at the Wellmont Theatre later on, Gere shared the insight he gained, not only from the role he played, but also from the hands-on research he did in preparation for it. He understands how having nowhere to live is like  being in a black hole, that if people got too close to him, they felt they’d get sucked in by his failure and misery, that you don’t just get ignored, you are avoided. Gere said, “keep people in their apartments and homes. It’s much cheaper for us. New York is the only state that if you need a bed, you get a bed. Every community should have that.”

Adubato asked Ellis if being homeless could really happen to anyone. “Do people believe that?” he asked. One response to that was that with the recession, it could happen.

Michelle Kroeze, Business Manager, The Salvation Army, said that she has worked here for over thirty years. She has seen people from stable suburbs go homeless, not just people from Newark or the Oranges.

Kathleen DiChiaro, Executive Director, Community FoodBank of New Jersey, offered that there’s a need to talk about homelessness beyond helping as just a “nice thing to do” because as taxpayers, we are paying taxes for the substance abuse and mental illness that can come with being displaced.

Anne Mernin, Director, Toni’s Kitchen at St. Luke’s Church, commented on the hunger issue, stating that Montclair has six Title 1 schools, and that 20% of students . . . that’s one in five . . . get reduced lunches. In New Jersey, one out of five people are at risk for hunger.

DiChiaro shared that many people serviced by the food banks are not homeless. They are senior citizens. The “hidden hunger” might be 20-40% higher than what is known.

At one point, Adubato prodded the panel: “This is the choir…as a somewhat cynical media person, I am trying to learn the compelling reason to help.”

Panelist Beverly M. Riddick’s outlook on this is if a person has a place to do homework, it affects his future for a job and his ability to  contribute to the community, and then property values are enhanced. Riddick serves as Executive Director for HOMECorp, an agency that collaborates with community, social service, religious organizations, the Township of Montclair and other municipalities.

Her response hit the bulls-eye for Adubato. “Now you are talking, so it is in the economic interest to create effective housing.”

Kroeze stated that funding from the federal government is helping in Montclair. A big part of this is a program called “Rapid Rehousing.”

The need for policy change for rezoning was brought up, with the logic that a lot of zoning laws were established in the 1950s. If that would change, we can change zoning for more affordable housing, explained Riddick. 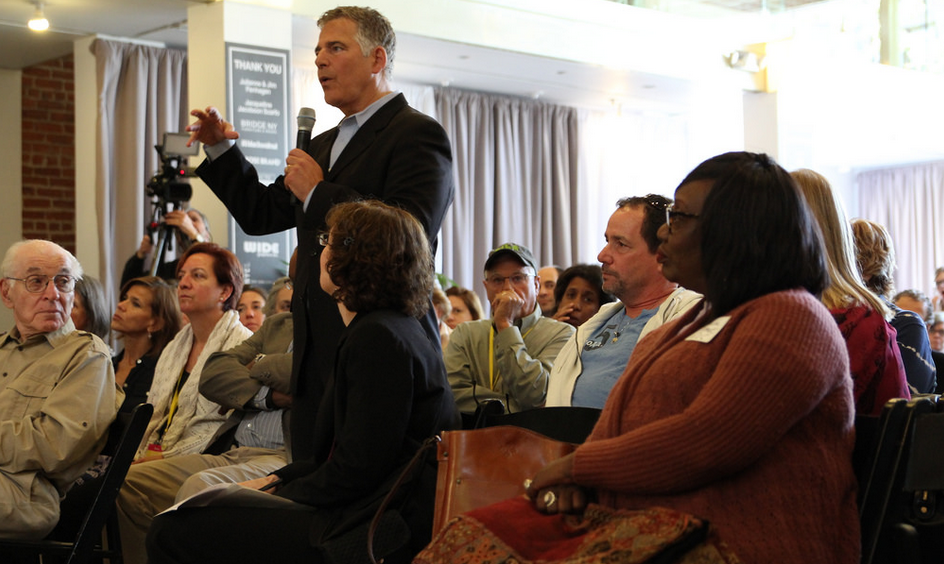 Adubato jumped on that, devil’s advocate through and through: “You want more people to come into our town when they (current residents) say, that’s why I moved here in the first place . . . so I don’t have to deal with that?”

Kroeze’s reply: “we’re not talking about bringing in people from other areas, we’re talking about people who lived here and want to stay here.”

Apparently, the plan for density in town has been watered down because of differences  in residents’ values. A couple of suggestions to increase community help include changing attitudes; that being out on the street can happen to anyone, that housing is a right, not a privilege. The goal for Montclair is “Vision Zero,” which means no homelessness, no hunger.

This Community Conversation on Hunger and Homelessness in Montclair will air on the PBS Stations WNET, NJTV and WHYY on “One-on-One with Steve Adubato” in the coming months.

Click here for the In Conversation Series with Stephen Colbert and Richard Gere.