“I knew that this New Jersey film belonged in this New Jersey film festival,” said Director Tim K. Smith, introducing his film Sex and Broadcasting to the Montclair Film Festival audience. Originally entitled Freeformer Death, Smith later explained that he changed the name of the film because many original audience members did not know that freeform was a label for a genre of radio. The title was changed to Sex and Broadcasting, referencing a book that had inspired Ken Freedman, General Manager of WFMU radio station, to devote his career to creative and innovative off-the-wall broadcasting.

The film focuses on the strong personality and dedication of Freedman, who has spent more than a quarter of a century keeping New Jersey-based WFMU on air and afloat. Indeed, Smith explained that the question his film tries to answer: “how does this thing [WFMU] stay alive?” Smith acknowledged that he himself had worked at WFMU, and though other filmmakers had previously tried and failed to tell the story of this quirky station, he was determined to make a successful documentary about the station.

“I think the film did capture a sliver of WFMU,” said Ken Freedman who also joined Smith for the Q&A after the film. With his entire adult career at the station, Freedman noted that it was impossible for any medium to depict all the personalities and efforts that make the zany radio station’s programming work. 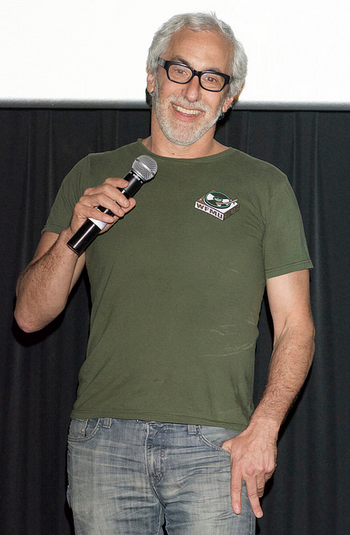 Yet Director Smith explained he made a decision to keep a major focus on 2009, when the community radio station, dependent on fundraisers, was in dire straights after the Great Recession. The film does provide an overview of the station’s history. Originally founded in 1958, WFMU was based on the campus of Upsala College in East Orange, New Jersey. Smitten with the idea of freeform community radio, Freedman became the General Manager shortly after graduating from college. He explains how he was influenced by the concepts of Lorenzo Milam, author of Sex and Broadcasting: A Handbook on Starting a Radio Station for the Community and founder of the KRAB radio network. His station would be totally independent and commercial-free.

Upsala College ran out of money and closed as an educational institution, yet in 1995 WFMU remained the only operating facility on the campus, a place that became a setting for squatters and gang violence. The film shows how Freedman remained able to attract volunteer DJs to do weekly shows, often skirting the edges of FCC regulations.

The film includes interview segments with Jim Marshall, “The Hound,” who talks about his ambitions to do provocative, “nasty,” cutting-edge radio in the 1990s. His interview reveals the tension between Freedman and himself, with the Hound ultimately deciding to do a broadcast that broke FCC rules, forcing him off the air and resulting in fines for the station. During the Q&A, Freedman commented that he valued that segment of the film, because the Hound’s perspective reflected an important moment of the station’s history. 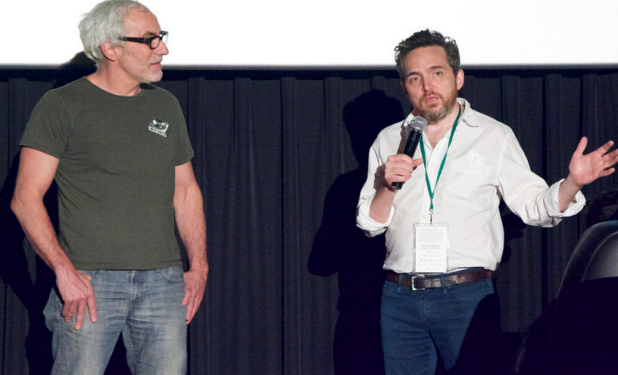 In terms of narrative, the film grips the audience’s attention in the station’s desperate need for money in 2009. Faced with extraordinary debt and the need to purchase new equipment for on-air and online broadcasting, Freedman is forced to run a special 24-hour fundraiser with a goal of $200,000. Things are not going well. Then Tom Scharpling, comes to the rescue. A TV writer who serves as a volunteer DJ of the popular WFMU “Best Show” for 13 years, Scharpling cajoles, berates and motivates his enthusiastic listeners from around the country to give big during his broadcast segment. WFMU survives.

Great scenes throughout the film depict the quirky personalities of a number of WFMU’s DJs and volunteers. Freedman broadcasts a segment in the middle of a lake in Bergen County, making it clear he has brought a plastic urinal receptor with him. Kenny Goldsmith broadcasts a segment in his undies and a fur coat, making crazy whining sounds. JM in the AM is the Jewish-themed broadcast featuring Orthodox Jewish performers and themes. One female DJ, states, “I find mirth extremely challenging.” The appearance of Andy Breckman “The Monk” evoked a spontaneous round of applause from the audience. All types of musical performers, even ones playing glasses filled with water, come into the station to perform live. In fact, the audience realizes everything about WFMU is performance art.

As Freedman stated early in the film, WFMU is all about “radio as it ought to be.”