The 2015 Montclair Film Festival closed Sunday night at MKA with Unexpected, Kris Swanberg’s tale of two vastly different Chicago pregnancies. In the last decade, Swanberg has contributed to a number of movies about the trials of 20-somethings in the Windy City and this movie felt like the denouement of her characters’ youth. There’s nothing like a pregnancy to clarify the line between youngster and adult. Swanberg enlists Cobie Smulders–lately finding her voice in film after a series run as one of the stars of How I Met Your Mother–as Samantha Abbott. At the beginning of the film she learns she is pregnant and not by design. Samantha works at a predominantly African-American public school in Chicago and the movie gains its impetus when Samantha hears that one of her students, Jasmine (played by Gail Bean), is likewise pregnant though with far different circumstances: Samantha is 30, gainfully employed, recently married, and white. Jasmine is 18, rings up groceries at a supermarket, is soon to graduate high school and is black. The film concerns itself with how people try to keep things on track in the wake of life change. “Nothing is going as planned,” Smulders laments to her baby’s father, as if that wasn’t implicit in the whole bargain. Nothing, as it turns out, will be the same, try as Samantha may to mitigate consequences. She spends much of the movie fretting about whether her career at work or as a mother will suffer more while trying to ensure that Jasmine continues to a four-year university in spite of the new and daunting landscape. 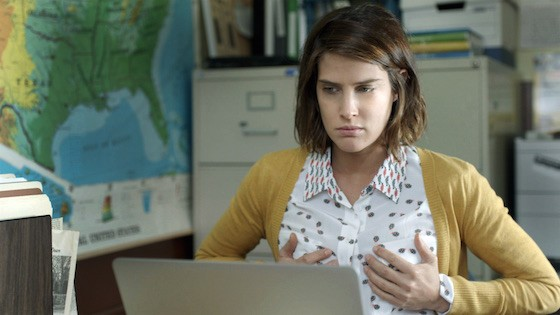 I kept hoping to see more of Jasmine so that the film would be more a contrast of two pregnancies from resolutely different backgrounds, a kind of Chicago fable of two women at polar extremes dealing with the same conflict. But Swanberg keeps the camera trained squarely on Smulders, the film’s major star. While we see Jasmine accepting the father’s ambivalence while dealing with the privations and shortcomings of being a teen mom, the movie is about Samantha and her myopic attempts to keep moving forward. Life, though, is about choice and timing. Eventually Samantha loses the opportunity to land her dream job while Jasmine has to rethink her college opportunities.

In the meantime Samantha’s optimism manages to convince Jasmine that it’s still plausible to go to the school of her first choice; the yawning gulf between their situations becomes apparent after a college visit makes plain what they didn’t want to accept. “I’m disappointed,” Samantha says, kicking dirt.

“My whole life has been disappointment,” Jasmine spits through clenched teeth. The movie becomes more about one person’s life of privilege intruding on another person’s attempts to make the best of a situation.

But fear not. Swanberg manages to tie the movie off with a neat bow while salvaging the women’s relationship. salvaging the women’s relationship. Jasmine’s embrace of a mother’s priority first is a welcome counterweight to the perception of a pity-party attendant to a teen pregnancy. It lifts and clarifies. Here is a girl, without those things we’ve come to believe are necessary to raise a child, nonetheless fully embracing and cherishing the idea of impending motherhood. In this, the student delivers a lesson to the teacher.