Have you even wondered why so many written works seem to be more ‘entertaining’ and informative when you hear them read aloud? Have you ever wondered what it is like creating those little ‘audio books’ that have generated a multibillion dollar industry? And, did you ever assume that you could never do that kind of work? All these questions were answered, and more, at the first in a series of presentations by Audible.com and The Montclair Film Festival: tonight we discovered what is Meant to Be Spoken.

Gathered together for this event were a group of experts in the field of creating entertaining and informative audio-reading experiences. Author John Scalzi (Old Man’s War), actress and audio narrator Barbara Rosenblat (Orange Is The New Black), and Audible producer Kat Lambrix all sat down with us to discuss their love of books, and to give us some insight into their world of audio books. 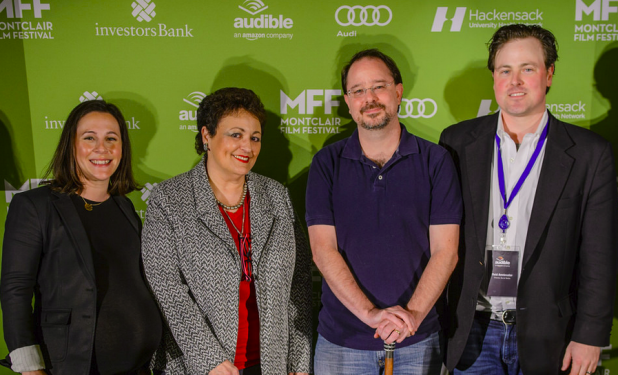 Arnhem Bruster took a break from his work with Audible to moderate our panel of experts. He dove right in and asked the obvious question on everyone’s minds . . . how do you all become involved in audio work? Barbara Rosenblatt responded that although her first audience was her mother, her introduction into the world of audio books came after an agent heard her voice and asked if she would be interested in recording a book on tape? This started her work on a Scottish-Canadian logging romance novel by Teddy Graham. It was hard work, but she did have fun!

John Scalzi took a very unconventional route (or maybe more conventional than one might think). According to him, after William Free performed his words, John actually started thinking with the methodology that he would be producing an audio book when he was writing. Also, the fact that he would be having his friends, like Wil Wheaton (Just A Geek), read his work made it all the more compelling for him. 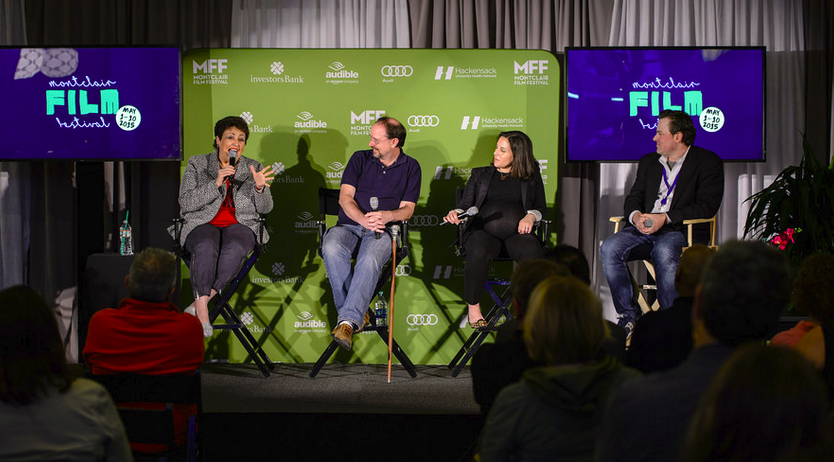 Kat Lambrix readily entered the world of audio books after starting out doing an audio tour of The Modern Museum of Art. She had met Brice Martin, and after speaking with him became so inspired that she saw not just his work on the page, but that it would be better to hear the story.

Why this love affair with audio? John immediately jumped after this question was posed and jokingly said “Money”! This is after all, a very potentially lucrative business for those who know what they are doing. Any author is always hoping that someone will buy the audio rights to his or her book. It is also about reaching an audience, the right audience. John does a lot of data analysis to make sure that he is reaching the correct people with the material that they will love. For many, audio is their primary form of reading, so it is important that the right material be available to them.

Barbara is always finding something new. She very often doesn’t know where a story will go, and she “likes that”. Her good friend Elizabeth Peters (A River in the Sky) would try to become “trickier and trickier” with her material, often just to keep things interesting for Barbara.

Kat’s love affair comes from her love of books. She is a voracious reader, and feels she gets to be a part of the action by helping to craft these stories. Her authors are her actors, and she loves the dynamic of being able to hear these stories come alive. She actually sneaks into the studio and watches the creation process . . . ssh!

John also loves the fact that he can mess with his narrators. He feels it is “awesome” that he gets to create these unique worlds, with these unique characters, and he gets to make them do things they normally wouldn’t do.

Everyone has a process, a method for achieving excellence in their craft and Mr. Bruster posed this question to the panel. He turned to Kat and asked a more focused question, “When it comes to casting, what are you listening for?” According to Kat, it often comes down to just intuition. She has to know the voices, know the actors, and know the stories to really get it right! 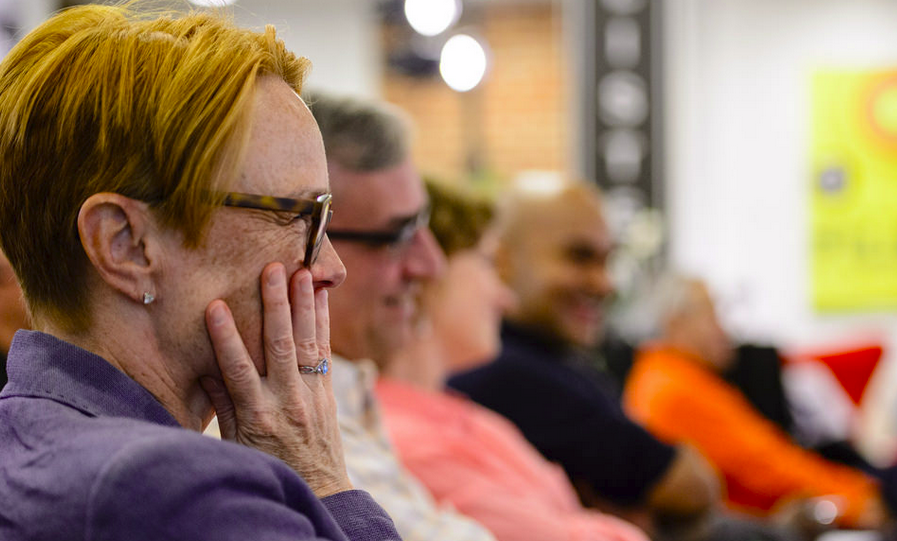 Barbara is very methodical with her analysis of a piece. It is important for her to allow the author’s “intent” to wash over her, his or her style and meaning. Certain characters, like the protagonist and antagonist, require consistency throughout the work, while other can exhibit certain quirks and lack that level of style maintenance. The ‘key’ to being successful in this business is to allow yourself to be surprised occasionally by the characters and the story.

John talked about how he hears the voices of the characters when he is in the process of writing his stories. It admitted that it is often difficult to find certain character’s voices, especially when he has no experience with those types of individuals. But, that is all part of the journey, finding that specific voice. By creating sharply defined characters and paying attention to the “voice” it makes writing stories easier to create, and they are more distinguishable when read.

The preference between utilizing dialogue or description as a conveyance is often a matter of the level of pacing that the writer wants for his or her story.

More often than not John will just let his actors run with the material, he says that you have to trust the people involved in the process, trust that they all are able to create a quality product . . . because they are! His performers will often call or e-mail him with questions. His friend Wil Wheaton contacts him often with questions about terminology and phasing.

Kat was then asked how she facilitates collaboration amongst the actors in the studio? She simply stated that she “gets them talking”. Discussion and communication are key figures in creative collaboration. Make sure that you have a group of people who work well together and who are able to just “let it go” when something really isn’t worth arguing about. When you can combine these elements effectively, something very special happens, something magical.

What’s next for the panel? Barbara is appearing in a feature with Ralph Macchio (“remember him?”), at the Hear Now Festival to offer her “words of wisdom” on narrating audio books, and she has three new titles coming out.

John is working his way up in Hollywood, he has three book series that are being developed for television, he is executive producer on a series, and he has a new novella coming out for Audible.com.

Kat, beyond the fact that she is expecting, is also working on what she calls a “killer project” involving Joe Hill and Stephen King. The Audible overseas team is hard at work, as well.

The audience was eager and ready to ask questions of their own. A young woman asked John about what it was like to write Lock-In, a futuristic science-fiction series about a genderless main character. He said that it was a wonderful opportunity to “explore both sides of the equation”. He is actually thinking of having both male and female narrators read his work so he will be able to offer both kinds of emotions from his book.

John and Barbara were asked if they have ever thought about trying the other side of the coin? Barbara writing and John narrating? John answered with “absolutely not,” at least not until he knew he could do it right. His friend Wil Wheaton has a very professional speaking voice and has the knowledge to use inflection to create emotion, John does not. It would frustrate him to not be able to do a professional job.

Barbara, on the other hand, has written a few books including a memoir, to answer the many questions that she has thrown at her about recording audio books.

The final question of the night was for Barbara about whether or not she has ever encountered a story that she was not interested in narrating? She replied almost immediately that there was only one book that she had no interest in without revealing the name of the book. Barbara continued by saying that when she finds a book that she believes is “substandard”, it is her job to “elevate” that piece of text, to make it as successful as possible.