Deep in the heart of the American desert, three officers— Davis (Johnny Simmons), Flores (Gabriel Luna), and Hobbs (Clifton Collins Jr)— patrol a remote border crossing. On a typical day, their routine consists of a few minor stops, an arrest now and then, and a whole lot of boredom. But when a single car stop throws the trio into crisis, their allegiances shift, forcing them into an unexpected conflict, uncovering secrets roiling just beneath the surface. Greg Kwedar’s award-winning TRANSPECOS is a sun-drenched noir that will pin you to the edge of your seat. 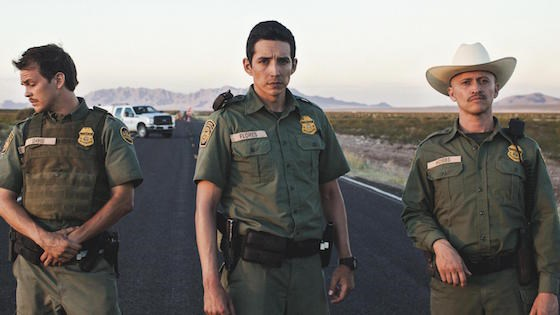 Read MFF’s insightful and inspiring interview with Director and Screenwriter Greg Kwedar below.

How would you describe TRANSPECOS in your own words?

Greg: TRANSPECOS follows three U.S. Border Patrol agents, best friends and partners, during one day on the job in a lonely section of the desert. What begins like most days, where the boredom and heat is so severe it can choke you, becomes a violent journey into the strange heart of the border. My writing partner Clint Bentley and I spent over four years researching and writing this script. Border Patrol is a very insular agency, and to push past the bureaucracy and into the hearts of the men and women who do this job we had to venture out into the desert ourselves. There we’d often find agents bored out of their minds eager to talk to anyone with a pulse, and we’d pretend to be lost tourists with an upside down map. As soon as they saw us as people who were genuinely curious about their work and not there to judge them – the stories started to flow. This evolved into closing bars in one-stoplight towns with agents, and from there we started to build these characters, and this world.

Greg: In college I started an organization that took college students down to the Texas/Mexico border almost every weekend to work in underserved areas. We were trying to understand what it means to be a global citizen and connect with families who were torn apart and stuck in limbo in this border land. It wasn’t completely altruistic; we drank beer every night and ate a lot of tacos. But I started making my first videos down there to capture what I was seeing, and knew that when I made my first film that I’d come back to the border and tell a story there. I never thought it would be about Border Patrol because all I knew of agents was when they’d lean in my car window at the border and ask if I was an American citizen. But once I started researching Border Patrol and started to learn more about the agents who do the job I became fascinated. It’s our nation’s largest law enforcement agency and I believe it’s least understood. Over 60 percent of agents are Hispanic and do a job that is complex and dangerous. But we were most excited to tell the human story behind the uniform.

What do you think TRANSPECOS says about our current political environment?  Do you like the idea of a wall on the US-Mexico border?

Greg: Oh boy. This is a loaded question! While this is an issue I care deeply about, we worked very hard to never explicitly state a message behind the movie. It was our hope that the film could inspire a conversation where the audience can arrive at their own message and become the change agents. We sought to display that the border is vastly complex, with human lives caught in the balance. I’ll say this about the political environment surrounding the issue – I wouldn’t trust any simplistic solution to this conflict, the wall included. It’s been said that the borders we make for ourselves define us. If this is so, our border demands to be examined. Not from a lofty perch insulated by ideology, politics, and morality, but thrust into the deserts, riverbanks, and mountain ranges that contain the border. And deeper, into the hearts of the people who traverse it. We’ve been inheriting and passing on this conflict since the Apaches and Comanches fought over the same land ages ago. It’s my sincere hope that we can interrupt the cycle of violence and despair and once again live up to the poem, The New Colossus, that is inscribed at the base of our Statue of Liberty. And when has a wall ever been a good idea throughout history?

What insights can you share about the people who serve our country at the border?

Greg: In researching this movie over four years and spending a lot of time getting to know agents I could talk your ear off on all the amazing stories and details about the agents who do this job. Like any law enforcement agency in our country there is a spectrum of character and integrity. I was fortunate to work closely with very honorable men who wore the green uniform. Yet, in an era post-September 11th, the agency grew very quickly and a lot of the standards from the old days got watered down. Where agents used to work in the towns they grew up in, coached little league and volunteered at the local fire station – now these communities are infused with new agents from all over the country who were former used car salesmen, Wal-mart clerks, Army vets from Iraq and Afghanistan who were literally recruited by posters that said, “Like the outdoors? Join Border Patrol!” This brewed a lot of distrust within the community and agents became more like an occupying force in a foreign land and only had each other. Literally, some guys I knew would have to drink a beer in the next town over. But on the opposite side of the coin I’ve heard amazing, compassionate stories like the same planes and helicopters that would look for illegal immigrants would drop care packages of candy and gifts over Mexican border towns at Christmas. It’s a strange world down there.

How did you select the actors who play your lead characters?

Greg: First, I worked with a brilliant casting director Rich Delia who came onboard very early into the process and has a track record of putting together special ensembles from SHORT TERM 12 to DALLAS BUYERS CLUB, and he had a wonderful understanding about the characters. You first formulate your decision by watching as much of the actor’s work as you can get your hands on and try to see a thread in there that presents something uncovered that could be discovered. I watched interviews with them – hell, I even read their tweets. But ultimately it comes down to an instinctual leap of faith that is cemented when you get to meet with them face to face. I think you can find everything you need to know as a director from having a meal with an actor. I’m eternally indebted to Clifton Collins Jr, Gabriel Luna and Johnny Simmons for their brave and committed performances. Clifton’s depth of preparation, Gabriel’s soulfulness on and off set, and Johnny’s journey of discovery all lent itself to each character and the overall experience of making the movie. I love them. I really do. I hope we make a lot of movies together.

Greg: Stop “getting lunch” to “pick people’s brains” and set a start date to make your movie. Some real, tangible date in the future where you fully intend to finally make your movie starts a whole series of events in motion that creates an authentic sense of urgency around your project. It’s “we’re shooting the first week of June” not “we’re hoping to shoot sometime in the summer.” People want to be part of a train that’s leaving the station. We always said we’d let an outside circumstance shift our schedule but never an internal one. I was guilty for years of the lie that if I can just meet the right people I can make my film a reality. Do yourself a favor and Google Ava Duvernay’s 2013 keynote address from the Film Independent Forum. It’s an important and motivating kick in the ass!

Any advice for writers working on screenplays?

Greg: My writing partner and I like to frame the way we write screenplays as following this path. First we start with a world or setting that fascinates us. Then we ask who are the people that occupy that place and are they in harmony or conflict with the setting they inhabit? And then we build the story to drive our characters through that place. I think it’s a cool way to construct a screenplay that seems counter intuitive, rather than high concept plot hook and then figure out who and where to hang it on we start from the bottom up to ensure our world and characters feel very lived in.

Greg: I hope they have a great time first and foremost. It’s a unique thrill ride into the heart of the border from a perspective I don’t think they will have ever seen. But more than that, I hope they experience the human connection to the conflict on both sides of the line, that the conflict now has faces and names.

Greg: Experiencing the movie with the wonderful MFF16 audiences and watching my peer filmmakers’ work. Also, I want to have a quintessential “Montclair” weekend – I’m waiting for recommendations of what I must do, eat, and drink! Let’s do this, ya’ll!