When an unexpected tragedy befalls an amateur game inventor, his wife and a rival make a pact to share in the spoils of his invention. But when that invention becomes an international sensation, the pair chart different courses in their own lives, until desire brings them together again for one final game. Adam Pinney’s THE ARBALEST is a wildly inventive comedy that takes the details and design of the 1960s and 70s to new heights, turning a tale of unrequited love into an alternate reality where a beloved toy brings wild success and never-ending suffering. 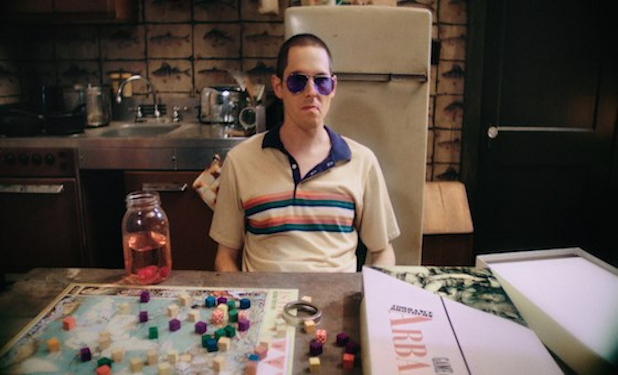 Director Adam Pinney talks candidly with Montclair Film Festival 2016 about the inspiration for this film and the creative process behind it.

Reviewers have been hard-pressed to describe your film or pigeonhole it by genre. How do you describe THE ARBALEST in your own words, and what genre, if any, do you feel would best represent the tone of the film?

Adam: I do think this is a rare sort of film that is a different genre to different people, and at this point, I enjoy the reaction that it gets, and how it takes away certain expectation from an audience. When you are told something is a comedy, then you go in expecting to laugh, or if you go in thinking it’s a drama, you expect to be moved in some way, and different people react so differently to the same situation. The way different ideas and moments hit you in this film offer so many varied reactions, and I think that makes for interesting cinema.

What made you want to tell this particular story and why did you choose to set the story during the late 60s-70s?

Adam: I wanted to tell a story about male entitlement and the dangers that leads to. Foster Kalt, the main character, is an adult who treats his feelings and obsessions in a way that an adolescent would and, for me, that was a fitting analogy to how the broader views of power and control seem to work.

It takes place in the 60s and 70s because a lot of my influences for the character stem from this period. It also is a sort of alternate-history piece, so putting it in the past allows opportunities to subvert the world you think you know. It also was just fun to be able to create sets and costumes and play in that space for a little while.

You’ve said that THE ARBALEST was a highly personal project. What feelings and/or personal experiences did you draw upon to create the storyline/characters?

Adam: I think this is one case where I might have been misquoted. While any project of this magnitude is going to be personal, based solely on the effort and time put into it, I wouldn’t say it’s something that comes from a very personal place for me.

Most of the feelings I put into the character come from the way I felt when I was 14 or 15, and I know many men who also felt this way when they were teens – that they were owed this returned affection from the girls they liked. Foster presented an opportunity to see those feelings from an outsider’s perspective, or from the perspective of someone who has matured in their thoughts about how we treat women in society.

The predominant theme of THE ARBALEST is that of obsession. As the creator of these characters, why do you feel that Foster is so obsessed with Sylvia?

Adam: When I was about 15, there was a girl in my neighborhood who I was in love with. We had never talked. I just thought about her all the time and every time I was around her, I would get butterflies in my stomach. She was a cheerleader. I was not anything close to a person who would be with a cheerleader. I still got the guts up to ask her out one day, and she said yes. I took her to McDonald’s. We sat by a lake. She let me borrow her Green Day CD. For me, this meant that we were going to make out all the time and get married and that was it. Of course, we never went on a second date. Her dad answered the door when I returned her Green Day CD, and he told me I should just go home. It made no sense to me. And my teenage obsession with her continued for about a year. That is the type of obsession I wanted Foster to have. One that was based solely on how I felt about the situation, and one that is so immature and unfounded.

How did you go about casting this film, and how much input did you allow the actors in developing their individual characters? Did you find that the characters changed/evolved during filming?

Adam: We cast the two leads because I either knew them or was familiar with their work. While we did talk a bit about character, I really wanted everyone to bring their own ideas to what they thought their character was like. Foster Kalt is a bit of an enigma and I wanted him to be uncomfortable to watch. Mike Brune brought so many odd tics and weird mannerisms to the character and it felt very organic and strange. It put me on edge, and that’s how Sylvia would feel being around this guy. I love his performance, and I love the take-no-shit attitude that Tallie Medel brought to Sylvia.

As a first-time feature director, do you have one piece of advice for aspiring filmmakers?

Adam: Find a small group of people that you love and trust and make movies. Help them with whatever they need and allow them to help you with whatever you need. It takes a team to make a film and finding great collaborators is essential.

Adam: At the end of the day, I hope they are entertained and feel they watched something interesting and different. That’s what I love about film festivals. You can watch something that you are not likely to see otherwise and you can be exposed to varied forms of cinema.

Adam: Is it super lame to say EVERYTHING? I am beyond thrilled to be a part of this particular festival and I’m looking forward to seeing some of the films and meeting other artist and filmmakers! It’s also close to our lead actress, Tallie Medel’s, home, so being able to show it to her friends and hang out with them is going to be a blast!