The stellar David Oyelowo (SELMA) and Academy Award® winner Dianne Wiest join forces in Maris Curran’s exquisite drama FIVE NIGHTS IN MAINE, about a widower and his estranged mother-in-law who meet after a devastating loss. Heartbroken after the death of his wife, Sherwin (Oyelowo) drives up to Maine hoping to find some clarity and closure. But Lucinda (Wiest), who he knows to be harsh and cold, is suffering in her own way. In her magnificent debut, Curran balances raw emotions with a tender and atmospheric touch, allowing Sherwin and Lucinda the space to find peace as they become unlikely partners in healing. 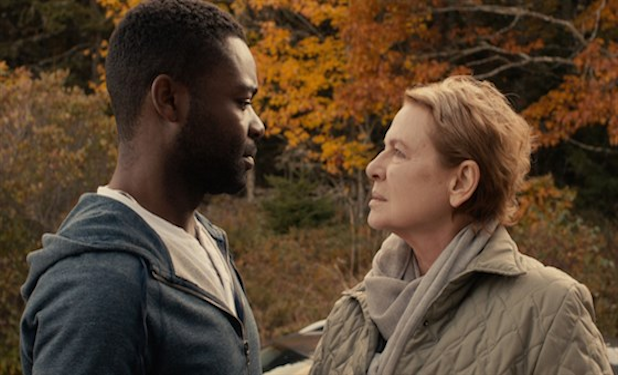 How do you describe FIVE NIGHTS IN MAINE in your own words?

Maris: FIVE NIGHTS IN MAINE tells the story of two people coming together who have worlds between them. By focusing the film on a relationship between a grieving husband and his estranged mother-in-law, there is an obvious initial disconnect. The thread that binds them has snapped. To me, the most interesting aspect of the story takes place in that space, in the room where these two people negotiate how to treat one another and determine what type of a relationship, if any, they will have. FIVE NIGHTS is a story about worlds colliding at the kitchen sink. It is about loneliness, frailty and connection, and ultimately, the compassion that comes from opening your eyes to another’s pain in precisely the moment you hurt the most.

What drew you, as the writer/director, to tell this story focused on a husband and his mother-in-law after the unexpected death of his wife/her daughter?

Maris: I gravitate to stories that examine the joys and trauma of everyday life – particularly emotional stories that form the fabric of our lives, but are rarely discussed. For FIVE NIGHTS, I was interested in the ways that loss can bind people together rather than isolate them. I’ve found that in the U.S., we treat grief as an individual experience meant to happen behind closed doors. But there is little more universal than caring for someone and losing them – even if that loss is not a death. In making this film, I was interested in putting two people who are grieving quite differently together to spark conversations that will hopefully continue beyond the film.

The setting of rural Maine seems so visually and thematically important. Why does the husband Sherwin (played by David Oyelowo) decide to go visit his mother-in-law Lucinda (played by Dianne Wiest) at such a difficult time, when his wife never had a good relationship with her?

Maris: Maine is a character in the film. It is a place where you can imagine Sherwin, the lead, finding solace and at the same time feeling completely out of place. Maine is a place of incredible rugged beauty where Sherwin can feel close to parts of his wife he did not have access to.

So many of the film scenes involve extreme close-up shots of the main characters, creating almost an intimate knowledge of them and their emotions. Some scenes have barely any dialogue, other scenes use sparse dialogue. I read that many scenes in the film used hand-held cameras. What were you trying to achieve with that style of filming?

Maris: FIVE NIGHTS IN MAINE is a sensual and intimate film. It is challenging in cinema to pull the audience into a singular emotional journey. By narrowing the frame and working with a handheld camera, we attempted to create the claustrophobic and uncomfortable feeling of grief. The film is shot by Sofian EL Fani, who previously shot BLUE IS THE WARMEST COLOR and TIMBUKTU. Sofian has a keen eye not only for composition, but also for emotional truth.

Montclair Film Festival attracts young aspiring filmmakers. What advice do you have for them?

Maris: The best advice I can give to a young filmmaker is – take the time to develop your voice and honor what is unique about you. And once you have, be true to that voice. Push forward, be kind, and help other filmmakers. We all always need a mentor and a mentee.

What do you hope MFF audiences will take away after watching FIVE NIGHTS IN MAINE at the festival?

Maris: In making FIVE NIGHTS IN MAINE, I set out to make a film to move an audience – to create an emotional experience. I have found in the entire process of making the film that people want to share their stories of loss, which are stories of connection. It is my hope that the film will inspire cathartic conversations.

Don’t be discouraged by Standby Lines – they work!